During the last decades the Albanian Mafia has become an important factor within the European drug world. Gangs are said to be in control of 70% of the heroin market in Switzerland and also control pieces of the drug market in other European countries. They are also rumored to be heavily involved in prostitution rackets in the United Kingdom, Belgium, and other European nations. Even as far away as the United States, Albanian gangs have made their presence felt. One of their most important European leaders is Princ Dobroshi.

Dobroshi was born in 1964 and controlled the northern path of the so called "Balkans route", a heroin smuggling route, that runs from Turkey through the Balkans, Czech Republic, and continued to the Nordic countries. Dobroshi is also infamous for his brutality, and believed to be behind several murders. In 1993 he was arrested in Norway and in 1994 sentenced to 14 years in prison for heroin trafficking (other charges were pending in Sweden and Denmark). 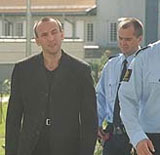 In a well coordinated operation he escaped from the Ullersmo prison in 1997, travelled to Croatia and underwent facial plastic surgery. As a new place of living he picked the Czech Republic and soon became the leader of the local Albanian drug mafias. On 23 February 1999 he was arrested in Prague. Over forty people were arrested all over Europe in follow-up operation.

The criminal underground had planned an armed attack on the Pankrác Prison to free their boss, but in August 1999 Dobroshi was extradited to Norway to complete his sentence. He was paroled and deported for "good behavior" in January of 2005. Then he returned into the Czech Republic (where his Russian wife and two children live) and stayed there for three months, until his visa expired. Later, he returned to Peć, Kosovo.

Investigation of terror suspect and feared gang leader Arfan Bhatti in Norway in September 2006 discovered contacts between one of the suspects and Princ Dobroshi (they had met in Pristina in 2005 and served timed together in Ringerike maximum penitentiary prison). MF Dnes, a newspaper in the Czech Republic, speculated about the possibility of Dobroshi taking revenge and organizing a terror attack in Prague. The day after, in an interview, Dobroshi acknowledged he knew the person but denied any involvement and plans.

He was interviewed by a Norwegian Newspaper in 2007 when he was living as a free man in Kosovo, he claimed to be a innocent man at the wrong place at the wrong time. He was now "dealing in tobacco".