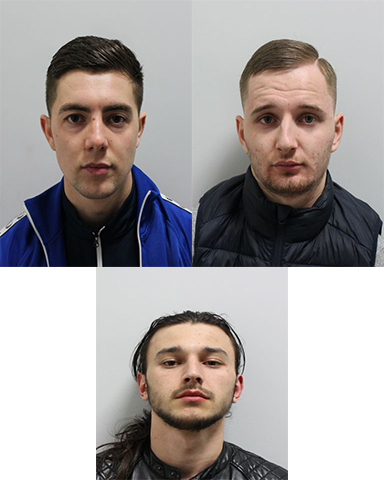 Officers watched as Orjon Uke got out of a taxi in Hennicker Road on March 24, 2017, and approached a parked BMW. He spent twenty minutes talking to the driver before leaving on foot. Five minutes later, cops observed Roland Vasija walk towards the same BMW, put a bag in the boot, and get into the passenger seat before the BMW drove away.

When OCP officers stopped the BMW and searched it they found £178,000 in a shopping bag. Roland Vasija and the driver, Algert Lami, were arrested. Uku was arrested after returning to Hennicker Road and attempting to flee when officers followed him.

A property linked to Uku, thought to be a stash house for drugs and money, was searched and turned up three blocks of white compressed powder wrapped in cling film, along with paraphernalia associated with the supply of drugs including scales and latex gloves.

Approximately half a kilo of cocaine was found hidden in a concealment in the BMW glove box along with suspected false and fraudulently obtained ID documents which officers believe were being used by Lami. A number of cell phones, drug paraphernalia and more false identity documents were recovered from Lami’s home address.

“Every organized crime group which traffics drugs is a business which relies on cash flow,” Steve Miles from the OCP told the media. “If any business loses an expensive commodity in the middle of a transaction, that cash flow stalls on both sides. That means a loss of investment in other criminal activity, the inability to pay their own people, damage to trust and credibility between criminal groups and loss of face and status with their peers, making it harder for them to do business together in future. Taking a substantial amount of money out of the chain as we have done here makes life far more difficult for criminals to do business and I believe our actions have caused significant disruption to this group.”