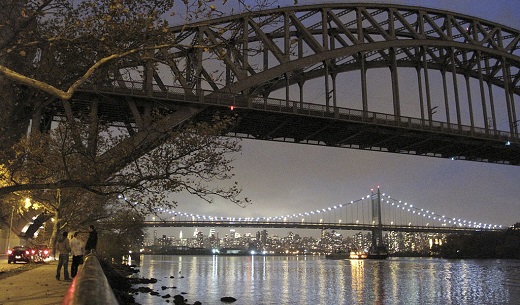 Albanian gangster Denis Nikolla was sentenced to 18 years in prison followed by 5 years of supervised release on Friday for his role in an extortion plot involving a man with close ties to the Albanian Mafia and a corrupt police officer with the New York Police Department.

36-year-old Nikolla was guilty of two counts of Hobbs Act extortion conspiracy, one count of threatening physical violence in furtherance of an extortion plan, and one count of brandishing a firearm. The charges relate to three schemes to extort small business owners in Astoria, Queens.

Co-defendants Redinel Dervishaj and Besnik Llakatura are awaiting sentencing. Dervishaj, whose brother is a high ranking member of the Albanian Mafia, was convicted after a three-week trial in April 2016, while Besnik Llakatura, a police officer with the New York City Police Department at the time of the crimes, previously pled guilty.

“The defendant and his partners used fear, intimidation, and threats of violence to demand payment from those who dared to open businesses on their so-called ‘turf’ of Astoria, Queens,” stated United States Attorney Robert L. Capers. “When his victims refused to pay, the defendant and his partners escalated their efforts to secure payment, brazenly brandishing firearms at their victims. Today’s sentence sends a strong message that criminals who use extortion and violence to profit from others’ hard work in our community will be held accountable and punished.”

The three men had attempted to extort a Queens restaurant owner, demanding monthly payments in exchange for so-called “protection.” Shortly after the victim opened a restaurant in Astoria, Dervishaj paid him a visit and demanded $4,000 per month because the victim had opened in “our neighborhood.”

The restaurant owner sought help from his friend Llakatura, at the time an NYPD officer in Staten Island. However, unbeknownst to the victim, Llakatura was conspiring with Dervishaj and Nikolla in the extortion. Llakatura actively discouraged the restaurant owner from reporting the extortion to the police and warned the victim that Dervishaj and his associates would physically harm him if he did not pay. When the victim failed to make the demanded payments, Nikolla violently threatened him on a public street in Queens, pointing a semiautomatic handgun at the victim, ready to fire, before the victim managed to escape in his car.

Over the course of five months, each of the three defendants took turns collecting monthly payments from the Astoria restaurant owner, ultimately extorting $24,000 from him.

Nikolla and Dervishaj also conspired and attempted to extort the owner of two nightclubs after he opened a new nightclub in Astoria. Nikolla approached the owner with an extortion demand, indicating to the victim that other businesses in the area were paying him for so-called “protection.”

Finally, during 2013, Nikolla, Dervishaj and Llakatura also conspired and attempted to extort a proprietor of two social clubs in Astoria. Accompanied by Dervishaj, Nikolla demanded payments of $1,000 per week from the proprietor for so-called “protection.” The victim refused to make the demanded payments and ceased going to his social clubs out of fear for his safety. Court-authorized wiretaps of their telephones revealed that all three worked together to locate the victim and force him to pay. In one instance, the defendants confronted a friend of the victim, badly beat him and pulled a gun on him, in an effort to locate and send a message to the victim. The victim ultimately fled to a foreign country for a period of time to avoid the defendants’ extortionate threats, and sold his social clubs.