Oh, how we miss The Sopranos! Tony and his two families. The drama. The violence. And those storylines that seemed too funny to be true. Like when Uncle Junior started running the mental institution as his personal fiefdom. Great entertainment, but that would never happen in real life, right? Wrong. Last week, the New York Daily News reported how 88-year-old mobster Harold Konigsberg was allegedly doing exactly what Uncle Junior did in The Sopranos. Using his street smarts and his stone-cold gangster ruthlessness Konigsberg had apparently taken control of the Westchester of Sunrise assisted living community in Florida, bullying his neighbors and flouting the rules.

A former resident accuses Konigsberg of “greasing staffers' palms so they’d give him the run of the place. Unlike all of the other residents, [The former resident] griped that Konigsberg gets to ignore the assigned seating in the dining room, use a spare room to conduct mysterious business, access the kitchen, and cook in his room with a hot plate. He had the staff jumping at his command. Running back and forth to the kitchen to get his juice or tea.”

Konigsberg (right) spent the better part of his adult life behind bars after he received twenty years to life for strangling Teamsters official Anthony “Three Fingers” Castellito with a Venetian blind cord in 1961 on orders from union rival Anthony “Tony Pro” Provenzano. He began serving his sentence in 1963 and remained in prison until his release two years ago. 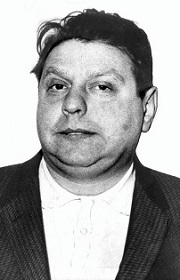 His nephew Eric wrote a book about Konigsberg's life of crime titled “Blood Relation.” It details how Konigsberg worked for New Jersey mob boss Abner “Longy” Zwillman and became one of the crew’s most prolific hit men.

With promotion like that it’s not hard to see how he came to “run” the nursing home he’s currently at.

It is hard to change what you really are deep down inside. The mob is filled with elderly gangsters who could just as easily sit back and enjoy their last years fishing or watching Wheel of Fortune, yet prefer to run criminal rackets and get down and dirty with the new generation.

Just take one look at 95-year-old Colombo underboss Sonny Franzese. At the age of 93, Franzese was charged with shaking down the Penthouse and Hustler strip clubs in New York City. While most of the men frequenting said establishments were popping Viagra left and right, a senior citizen was bullying its owners into paying protection money. He had no problem with his virility.

Or just take a look around Florida. The state known for its large percentage of senior retirees. While most of those elderly folks were enjoying the warm climate, 96-year-old Genovese mobster Albert “Chinky” Facchiano turned up the heat on debtors who were unable to pay him what they owed his loansharking and bookmaking operation. He even offered to do a hit despite his old age, saying that you’re never retired, and that he would kill for the family.

Genovese capo John “Buster” Ardito was heard on a wire talking about a trip he and Facciano made to threaten another Genovese mobster not to cooperate. Ardito was 85 at the time. “Yeah, two hitmen, me and Chinkie, 95 years old. I tell you, if we pull the trigger, we woulda fell on the floor.”

When it comes to the Mafia normal rules don’t apply. Once a gangster usually means always a gangster. You better check on your grandparents to see who’s living next door to them. With all these violent men living long lives chances are increasing that it won’t be long until the major cause of death at a retirement home is… murder.

LOL That line deserves its own mob movie! ;-)