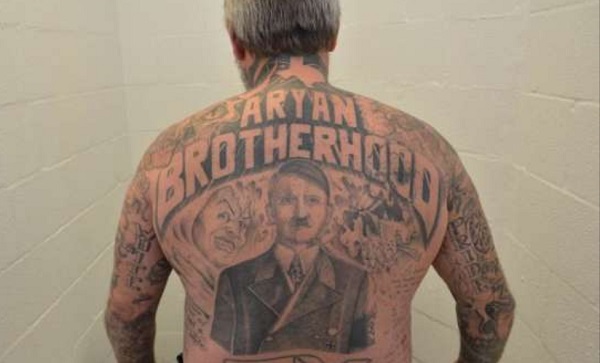 Sixteen members and associates of the Aryan Brotherhood prison gang were charged with racketeering and murder on Thursday after a long-running investigation into drug trafficking and violence inside and outside of California’s most secure prisons.

Yandell, Troxell, Sylvester, Burhop, Torres and Corbett were all already serving life sentences for murder. During the investigation, authorities uncovered a drug trafficking partnership between Aryan Brotherhood members Yandell and Burhop with Torres a member of the Mexican Mafia.

Five other individuals were also arrested as part of the investigation. They are: Samuel Keeton (40); Jeanna Quesenberry (52); Kevin MacNamara (39); Kristen Demar (44); and Justin Petty (37). Warrants have been issued for the arrests of 64-year-old Kathleen Nolan and 50-year-old Matthew Hall.

Cellphones to make calls from your cell

Prosecutors say that, between 2011 and 2016, Aryan Brotherhood members and associates engaged in crimes ranging from drug trafficking to murder, all from within the prison system. Yandell and Sylvester oversaw a significant heroin and methamphetamine trafficking operation from their shared cell.

They used smuggled-in cellphones to direct their drug trafficking activity from their cell to the streets of Sacramento and other California cities. Using a contraband cellphone, Yandell and Sylvester communicated with Aryan Brotherhood gangsters to direct drug trafficking activities, membership in the organization, order murders, and oversee other criminal activities.

To protect and expand their operation, the indictment alleges that the Aryan Brotherhood members murdered five other inmates and conspired to murder several others. Prosecutors allege that on October 7, 2011, Sylvester murdered an inmate at Folsom State Prison and, on August 12, 2015, Aryan Brotherhood associates carried out an order to murder a rival prison gang member at Folsom State Prison.

But murder doesn’t bring in the money. Drugs does. Prosecutors say Aryan Brotherhood members and associates oversaw an extensive drug-trafficking network that operated on the streets of Sacramento, Southern California, Missouri, Las Vegas, and elsewhere. On August 1, 2016, MacNamara, a lawyer, and Demar, posing as a paralegal, visited Sylvester in Folsom State Prison in order to smuggle meth, cellphones, and tobacco. When the contraband was discovered, Sylvester, using a cellphone, advised Demar to blame their contraband smuggling on the Aryan Brotherhood in order to get out of trouble. Petty allegedly sent heroin, methamphetamine, cellphones, and other items concealed in food packages to Aryan Brotherhood members at Folsom State Prison and High Desert State Prison.

“We are announcing a significant blow to the leadership of a violent criminal enterprise run from inside California prisons,” U.S. Attorney McGregor Scott stated. “Despite the incarceration of its leaders in the state’s most secure prisons, the Aryan Brotherhood has maintained its deadly influence over members, associates and others both inside and outside prison walls. The charges allege multiple murders of those who run afoul of the gang, as well as an active drug trafficking operation that spans multiple counties and states. The prosecution of these individuals, if convicted, will help to dismantle and weaken this dangerous organization.”

If found guilty, these alleged Aryan Brotherhood members face a maximum sentence of life in prison. Since most of them are already serving such a sentence, they probably aren’t losing any sleep over that. However, some of the charges could also result in the death penalty for some of the defendants. That might change things a bit for some.