A senior leader of the Aryan Circle (AC) and two subordinate gang members pleaded guilty this week to being an accessory-after-the-fact to racketeering murder. 38-year-old David Wayne Williams - photo above, a senior leader in the gang, and 43-year-old Leland Hamm pleaded guilty to their role in the murder of 51-year-old Clifton Hallmark.

The Aryan Circle is a powerful race-based, multi-state gang that operates inside and outside of state and federal prisons throughout Texas, Louisiana, and the United States. It was established in the mid-1980s within the Texas prison system. Recently, the AC’s structure and influence expanded to rural and suburban areas throughout Texas, Louisiana, and Missouri. The AC emerged as an independent organization during a period of turmoil within the Aryan Brotherhood of Texas. The AC was relatively small in comparison to other prison-based gangs, but grew in stature and influence in the 1990s, largely through violent conflict with other gangs. 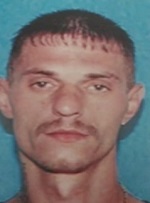 The plea agreements by Williams and Hamm (photo on the right) further state that the AC enforces its rules and promotes discipline among its members, prospects and associates through murder, attempted murder, assault, robbery and threats against those who violate the rules or pose a threat to the organization. Members, and oftentimes associates, are required to follow the orders of higher-ranking members without question.