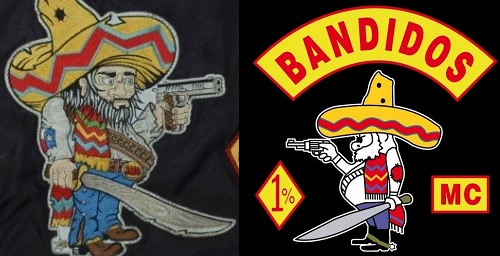 It was yet another glorious moment for the Bandidos motorcycle club: On October 8, 2016, the bikers celebrated the founding of their first chapter in the Republic of Ireland. Irish newspapers were filled with articles about, what they labeled, the international, violent, and criminal motorcycle club from Texas, USA, which had now planted its flag in Ireland.

For those who follow outlaw bikers in the media, this was nothing new. It was the usual talk about scary, violent bikers and their past deeds. Except that for those among us who have a very keen eye, one piece of important information was missing from all these articles about the infamous biker club, namely: The Bandidos MC had split up and was divided into two separate entities. No longer were they, as the media continued to report, one ever-expanding outlaw motorcycle club with chapters on several continents.

According to the official website of the Bandidos USA, the club split up in 2007. “On July 17, 2007, the club was split,” the message read. “Though we share a common name and a similar patch, we are no longer associated with Bandidos MC in Europe, Asia and Australia.”

That information came up on the American Bandidos’ site earlier this year, but as early as 2011, the Danish Broadcasting Company DR wrote that the Bandidos MC split up and that the Bandidos in the United States have a new patch.

Besides what DR wrote back in 2011, there has merely been mention and speculation about the Bandidos split on this website, internet message boards, and once or twice in Scandinavian newspapers. The only official American news source to report on the split was the Houston Chronicle in January 2016, when it wrote about the arrest of Jeff Pike, National President of Bandidos USA.

The article said, “In fact, years back, Pike severed ties with the club’s chapters in Europe and Australia over their propensity for bloodshed and mayhem, as well as drawing recruits who didn’t own motorcycles. Back in Texas, Pike drew the ire of some older members with the 2011 redesign of the large patch worn on the back of Bandidos riding vests.”

But that’s it. Nothing more, nothing less. Something like this has never happened before and it is something of a mystery that the media has not noticed this and written more about it.

On its website, the American Bandidos offers a terse explanation as to why they broke up. “As time wore on, differences of opinion between the United States, Europe, and Australia about club values and definitions, prompted changes to be made. It was discussed at the annual Chapter Presidents meeting in February 2006. There it was decided by 100 Vote to set Europe, Asia, and Australia free to follow their own path.”

Gangsters Inc. emails to the club asking for a bit more information behind the move went unanswered.

Until someone goes public about the specific reasons for the split and the subsequent creation of a new patch, we can still expect articles about Bandidos MC where the club is described as a unified, international club. Even though it clearly isn’t anymore.

What it is, however, is a unique entity in the world of outlaw biker gangs. The club that started it all, the club that gave birth to hundreds of chapters around the globe, the original Bandidos have severed ties with its chapters in Europe, Asia, and Australia but are still letting every chapter continue to use its notorious name and colors while the granddaddy of them all created a new patch for itself.

It’s a unique occurrence that – for reasons unknown - has been largely ignored by the media.