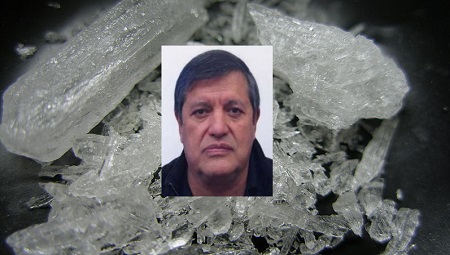 Seven pharmaceutical companies in Belgium have been accused of selling large amounts of medicine containing ephedrine to Mexican drug lord Ezio Figueroa-Vasquez (photo above), who used the products to manufacture $360 million worth of crystal meth.

As a criminal one has to cut corners and be creative. Meth cooks have been very creative with how they get their hands on the ingredients for their highly addictive drug. Its main ingredient, ephedrine, can be found in every-day medicine like cough syrup and nasal spray, thus they lined up at the local pharmacy to buy the stuff in bulk. Once their faces were known, they started using other individuals – usually addicts – to buy the medicine, a practice called “smurfing.”

For 63-year-old Mexican drug boss Ezio Figueroa-Vasquez, that kind of activity is small potatoes. He works with an army of cooks working in laboratories, soldiers, financial wizards, politicians, and crooked cops to run his business. He’s no smurf and has no time for smurfing.

That is why, authorities in Belgium allege, he – sometimes personally, other times through middlemen – contacted several pharmaceutical companies in Belgium, seven in total, to inform about a possible business deal worth millions.

They allege he did this in other countries in Europe, Asia, and Africa as well.

According to Belgian newspaper De Standaard, the seven Belgian companies supplied the drug lord with 4 tons of ephedrine medicine. After Ezio Figueroa-Vasquez’s cooks had extracted the ephedrine from the medicine in their laboratories, they could produce 66 million meth pills worth $360 million dollars.

That is some serious business.

The pharmaceutical companies claim they are innocent and deny knowing where their product ended up. Prosecutors, however, claim that e-mails and wiretapped conversations prove the companies knew full well what their product was being used for.

The verdict is scheduled for April 5.