“Biggest heist of century” shocks Paraguay as robbers use grenades to steal $40M, kill one cop in shootout 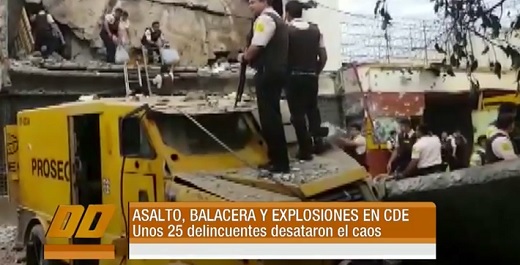 It has been dubbed “the biggest heist of the century” by authorities and if you’re thinking they are exaggerating, think again. A group of around 50 armed men rode into the Paraguayan city of Ciudad del Este Monday morning to wreak havoc and make off with an estimated $40 million dollars.

The crew split up in two separate groups - one blew up the front of a private security firm tasked with transporting cash, while the other began shooting up a nearby police station, resulting in a two-hour gunfight ending with the death of one officer and the wounding of several bystanders.

With police occupied, the robbers made off with the multi-million-dollar jackpot. Though the security company refuses to detail how much money was stolen, reports indicate their trucks were filled to capacity, which would be around $40 million.

As they fled the scene, robbers set fire to several cars to create yet another diversion. They also set up roadblocks in order to stop police from following them. According to local media reports, the robbery crew appeared to be Brazilian.

Several robbers were involved in a shootout with Brazilian police at the border between Brazil and Paraguay several hours after the robbery. Three gangsters were killed and two injured. Police found a car filled with guns, ammunition, bulletproof vests, and explosives.

Authorities in both countries are now undertaking a largescale manhunt for the remaining gang members.

Parts of the robbery and gunfight were caught on various cameras and shown on Paraguayan television. Watch the clips below: