According to Otto, he had a meeting in Belgium with a man he knew. As soon as Otto got through the door, that same man pulled out a gun and tried to shoot the biker boss in the head. “At the last moment, I turned my head, causing the bullet to miss my skull and hit my neck instead,” Otto told De Telegraaf.

What happened afterwards remains fuzzy. The bullet barely grazed Otto’s carotid artery and the “lucky” biker was able to get himself to the hospital, but there is no word on what happened directly after the shooting. 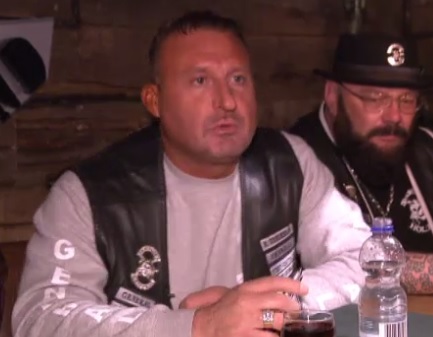 Otto (right) knows the man who shot him, but refuses to tell police or reporters who that man is or why he decided to fire a bullet at his head. He is also not filing any charges against the hitman.

“We will handle this ourselves,” he ominously told a reporter for De Telegraaf.

As president of No Surrender he commands an army of hundreds of men. New chapters are opening up all over the place. The club was founded by Otto in the Netherlands in 2013, and is now recognized as the fastest growing outlaw motorcycle group in the country. Though, insiders tell Gangsters Inc. that these numbers do not mean much as, how one outlaw biker put it, “they will make any fool a member.”

Regardless of the debate about the quality of members No Surrender has, fact is they have become a significant player. Not to mention a media darling. They have been part of several television programs, including a one-hour documentary about themselves.

Sometimes, however, they are caught on tape when they really shouldn’t be. As happened last year when security cameras filmed several No Surrender members involved in a wild shootout in broad daylight.

And when three of its members joined the fight against the terrorists of Islamic State (ISIS) in the Middle-East No Surrender made headlines all over the world.

At the helm of this operation is president Klaas Otto. Who wants him dead? And why? It’s a person he knows. Is there a power struggle? Belgian media reported Otto had been shot by a fellow club member, while Otto vehemently denies that. Was it a deal gone bad? Or was someone jealous of all the media attention?

Be patient. I’m sure we will find out eventually.