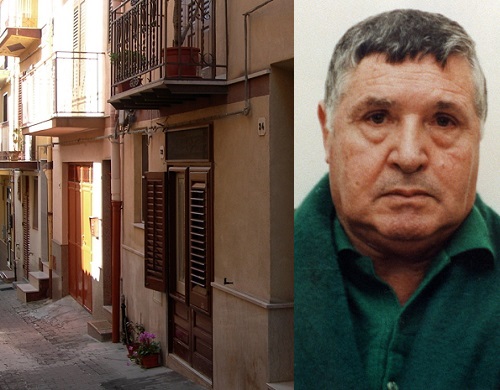 Here's the latest proof that old traditions, no matter how disgusting, die hard in Italy. On May 29, a religious procession wending its way through the city of Corleone, Sicily, allegedly stopped to pay respect to the first lady of Cosa Nostra, Ninetta Bagarella. She's the wife of Totò Riina, the elderly godfather serving several life sentences for the many murders he ordered during his reign as the Mafia's Numero Uno. La Bagarella, as she's called, was said to be standing on the balcony of the Riina family home, smiling to the pilgrims paused at her feet in obeisance to Her Highness. Although both Corleone's mayor and priest soon issued hasty denials and flimsy explanations, a marshall of the Carabiniere who was on the scene had left in disgust to report the incident.

I have every reason to believe that the participants intended the parade stop as a tribute to the Riinas. Their home (photo on the right by Carl Russo ©) is on Via Scorsone, a dark and narrow backstreet at the edge of Corleone. It isn't on the way from or to anything—not church, cemetery or central piazza. There's simply no other reason for the procession to squeeze through this tiny alley on its march.

The archbishop of the region, Monsignor Michele Pennisi, announced that he has formed a commission of inquiry on the matter, and stated, "I suggest that from now on, all stops of the processions are approved by law enforcement, to avoid unpleasant surprises." Italy's anti-Mafia community, from activists to politicians, condemned the Sunday "surprise."

Only one English-language news account has appeared so far. The short article fails to mention that the May 29 incident is one of several recent processions in Italy that have stopped to pay respect at the homes and businesses of Mafia bosses. Not even Pope Francis's public denunciation of the practice is enough to end the blasphemies.

Carl Russo is the author of The Sicilian Mafia: A True Crime Travel Guide. You can follow him on Facebook and Twitter where he reports on all things related to Italy's various Mafia groups.