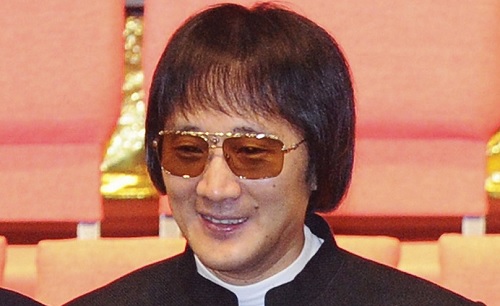 It was a typical Wednesday at the Yau Yim Kee fruit store on Hong Kong’s Shek Lung Street. For over a century the store has been a staple for shoppers and passersby. Yesterday was no different. It was business as usual until the door opened and violence poured in.

Four men wearing surgical masks and gloves entered the store around 7 pm and slashed three people inside with knives, including the 37-year-old manager, whose neck received a seven-inch-long cut wound.

Within 30 seconds the assailants fled the scene in a waiting car, leaving behind a bloody mess.

Authorities believe the attack is linked to a feud between the Wo Shing Wo and 14K Triad gangs and that it fits in a spate of violent incidents that find its origin in the alleged beating of Kwok Wing-hung - photo above, the leader of the Wo Shing Wo Triad.

Six months ago, Kwok Wing-hung, also known as “Shanghai Boy,” was hanging out in the ground-floor café of the five-star Peninsula Hotel in Tsim Sha Tsui around five in the afternoon when an unknown man approached him and allegedly punched him in the face.

The 57-year-old Triad boss kept it lighthearted after the attack, saying, “Someone said [I was] killed. You see. I’m in good shape. [I] just bumped into a table corner. You see how handsome [I am].”

But last month, one of his close associates - and Wo Shing Wo member - Pa Ki Ming was badly wounded in an ambush by a squad of eight rival gangsters.

It was time for revenge.

This brings us back to the Yau Yim Kee fruit store where three people, including one woman – the sister of the manager – and her husband, were badly wounded in a vicious knife attack.

According to an anonymous source close to the investigation, one of these three people “has close links with the 14K triad gang involved in the ongoing dispute with Wo Shing Wo.”

To get to one person the gangsters were willing to injure two more people who were simply at the wrong place at the wrong time. Say what you want about the man who started the violence when he decided to punch a crime boss in the face, but at least he went straight for the source and didn’t mess with innocent bystanders.