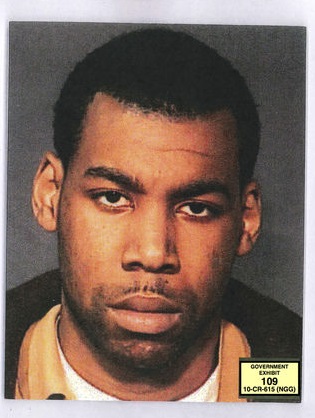 Shondell “M-Dot” Walker, a member of the Brooklyn-based Murderous Maddawg Bloods, was sentenced to 30 years in prison on Tuesday for narcotics trafficking and his role as an enforcer for Bloods gang leader Ronald “Ra Diggs” Herron. The 31-year-old gangster (photo above) had pled guilty pursuant to a plea agreement on October 6, 2011, to conspiring to distribute narcotics.

During Herron’s trial, Walker was called as a defense witness and testified falsely on Herron’s behalf. He testified that Herron had served as a positive role model in the Gowanus and Wyckoff Gardens communities, that he had never seen Herron sell narcotics, and that he had never worked, sold drugs, or carried a firearm on Herron’s behalf. Walker’s claims were substantially undermined by the admission into evidence of a letter he had written from prison in which he stated that he intended to remain loyal to Herron because of their membership in the Bloods.

Bloods leader Herron was convicted after trial and has already been sentenced to multiple life terms consecutive to 105 years in prison. He had done little, beforehand, to evade the eyes of law enforcement as he posted videos of himself on the Internet in which he identified himself as the leader of the Murderous Mad Dogs set of the Bloods gang, and claimed that he headed a “murder team.”

The videos also showed Herron firing weapons and threatening to use them to kill people. He also posted messages on Twitter in which he boasted that he had “beat the stabbing,” “beat the attempt,” and “beat the body.”

Herron and Walker’s convictions followed dozens of successful prosecutions over the past decade conducted by the U.S. Attorney’s Office for the Eastern District of New York, along with the FBI and NYPD, of violent gang members and drug dealers from the Gowanus and Wyckoff Gardens housing developments.

“This case proves the lengths gang members will go to protect their own,” stated FBI Assistant Director-in-Charge William F. Sweeney. “The subject will spend the bulk of his life in federal prison all because he felt allegiance to a deadly and criminal gang. The work of our FBI New York Metro Safe Streets Task Force and our law enforcement partners is vital to stopping the spread of criminal enterprises like these gangs, and we won’t back off until these gangs no longer exist.”