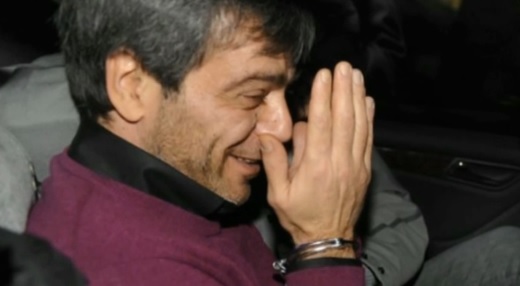 It’s a quote befitting of the situation in Italy, which is one drenched in Mafia intimidation, corruption, and malpractice. It’s also the topic of accusations between (former) members of the Camorra, Naples’ Mafia organization, and Italian politicians, who are asking each other the question: Who created this corrupt mess?

According to Camorra boss-turned-pentito Antonio Iovine organized crime in and around Naples was able to prosper because of widespread corruption in the local political system. “There was money for everyone in a system that was completely corrupt,” Iovine told investigators last month. “It made no difference what political side a mayor came from because the system operated, and operates, in the same way.” He continues, “I'm well aware of the crimes that I've stained myself with. But I'm explaining to you a system in which the Camorra is not the only one to blame.”

Nice of him to accept at least part of the blame, no?

50-year-old Antonio Iovine knows all about guilt and blame. For decades he was one of the top leaders of the Casalesi Clan of the Camorra, a group from Casal di Principe in the province of Caserta. Nicknamed “o’ninno” (the baby) because he was made a capo at a very young age Iovine was a force to be reckoned with inside the Camorra. As always with organized crime, Iovine’s strength lay in his clan. In their fight for control the various crime families of the Casalesi were responsible for over 1,000 murders in 30 years.

The families of the Casalesi were involved in all sorts of criminal activity, but they specifically exerted great control over the construction industry. Of course, construction is, by itself, a legitimate business with many honest and hardworking businessmen at its core. Men who are in frequent contact with politicians and civil servants about permits, licenses, and the needs of a city.

But, if you believe Iovine, many of those businessmen and politicians were very eager to cooperate with the Camorra to fill their pockets with cash. Some even became more than partners.

Then again, some of those accused politicians are quick to point out the Camorra’s violent reputation as a tool for mobsters to get their way. They were mere victims of a ruthless Mafia organization. Lorenzo Diana, for instance, was named by Iovine as one of those corrupt local politicians, he claims “there was nothing we could do, the Camorra dominated things, Iovine has discovered hot water.” After spending 15 years as a fugitive Antonio Iovine (right) was captured by police in November of 2010. In absentia he had been sentenced to life in prison for racketeering and several murders. He had been languishing away in prison under the prison regime titled article 41-bis, which is reserved for Italy’s most dangerous gangsters and criminals.

Behind bars Iovine made the stunning decision to become a pentito, a turncoat or cooperating witness. He wants to repent and tell all he knows about the Camorra’s criminal empire and its contacts in business and politics.

While Camorristi and shady politicians are still reeling from the news and possible consequences life in Italy continues as always. After numerous trials involving corrupt political bigwigs Iovine will have to do dish up a lot more dirt if he wants to shock Italian citizens. The story of political corruption and Mafia influence has become a very familiar one.

As recent as yesterday, Roberto Vargas, yet another Camorra turncoat, testified that politician Nicola Cosentino, a former undersecretary to three-time premier Silvio Berlusconi, was in fact a member of Cosa Nostra. He also said that Cosentino had met with Casalesi boss Francesco “Sandokan” Schiavone to talk about contracts and politics. Furthermore, he pointed out the politician as the one who accepted bribes on behalf of other construction companies.

Cosentino, meanwhile, was arrested back in April and charged with extortion and unfair competition in favor of his family’s petrol-pump business in southern Campania. A year ago he was also arrested on suspicion of collusion with the Casalesi Clan.

People in Naples call it ‘o sistema. It’s when the Camorra works in unison with corrupt politicians and businessmen to create an environment which fits their needs. Those who want to change or influence the system can only do so by becoming a participant themselves. They need to play along according to the rules of the system. Those that oppose and try to change or fight the system will be dealt with.

After journalist Roberto Saviano released Gomorra, his best-selling indictment of ‘o sistema, he became an instant target. Camorra hit men were tasked with finding and murdering him. Life as he knew it was over. Never again could he sleep peacefully. The system had spit him out for exposing its dirty secrets.

Saviano later told reporters that his book had ruined his life. He said he could have exposed the Camorra's criminal empire “with the same commitment and courage but with prudence, without destroying everything. I was too impetuous, too ambitious.”

Still, with his life in ruins and with his good intentions cast aside, a civil appeals court in Milan yesterday upheld the libel conviction of Saviano for defamatory statements in his 2006 book. “The appeals court confirmed the November ruling of a lower court that Saviano must pay 30,000 euros in damages to Enzo Boccolato for insinuating involvement in the La Torre clan,” newspaper Gazetta Del Sud reported. According to the ruling, “the statements contained in the book are objectively offensive, and the veracity of the news was not proven, in the evocative way that emerges from the sentences of the published text.”

Justice has prevailed after all.

The only question now is whether or not justice can also break the corrupt system which has been running things in large parts of Italy for so long now. Because in the end it doesn’t really matter who created the mess. It matters most who cleans it up and makes sure it doesn’t happen again.