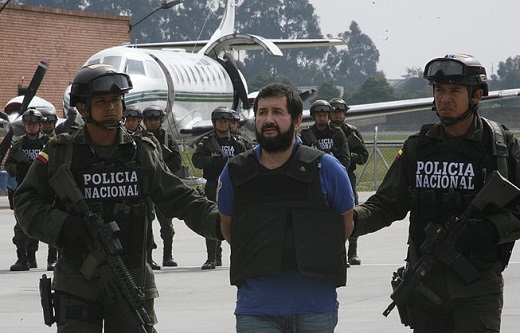 “The man Colombian authorities have called ‘The last of the great kingpins,’ now stands convicted and sentenced in an American court of law,” U.S. Attorney Preet Bharara told the press. Daniel Barrera Barrera, also known as “Loco Barrera,” a Colombian national, was sentenced Monday to 35 years in prison and ordered to forfeit $10 million dollars for his role in a massive drug conspiracy in which he trafficked a stunning 720 tons of cocaine.

The 48-year-old drug lord had quite the run. For decades, “Loco Barrera” manufactured hundreds of tons of cocaine annually in Colombia and trafficked it to various parts of the world, including the United States, and laundered tens of millions of dollars in proceeds from that narcotics trafficking activity.

He purchased the raw cocaine base, or paste, from the Fuerzas Armadas Revolucionarias de Colombia (the “FARC”). The FARC has been the world’s largest supplier of cocaine and has engaged in bombings, massacres, kidnappings, and other acts of violence within Colombia.

After purchasing the raw cocaine base from the FARC, Barrera converted the raw cocaine into powder at laboratories he owned and operated in an area of Colombia controlled by the since demobilized terrorist group, Autodefensas Unidas de Colombia (the “AUC”).

For years, the AUC’s main political objective was to defeat the FARC in armed conflict, and it financed its terrorist activities through the proceeds of cocaine trafficking in AUC-controlled regions of Colombia. At the time of Barrera’s criminal conduct, the FARC and the AUC were both designated by the U.S. Department of State as Foreign Terrorist Organizations.

After processing the cocaine powder in his laboratories, Barrera arranged for the shipment and transportation of the cocaine powder to locations on four continents. Although Barrera purchased raw materials for cocaine production from the FARC, he was able to maintain his network of cocaine-processing laboratories in AUC-controlled territory, in part by paying monthly “taxes” to the AUC.  The fees Barrera paid to the AUC also allowed him to move the processed cocaine safely through and out of Colombia.

Barrera additionally protected his massive cocaine shipments by the usual acts of violence and intimidation, including ordering many murders on those threatening his criminal empire. In order to support this violent protection of his drug trafficking, Barrera traded cocaine for hundreds of AK-47 rifles to arm his security forces and take control of the rural areas of Colombia where his drug laboratories were located.

In March 2010, the U.S. Department of the Treasury’s Office of Foreign Assets Control designated Barrera as a “Special Designated Narcotics Trafficker,” pursuant to the Foreign Narcotics Kingpin Designation Act, placing a bulls eye on his back and increasing heat from law enforcement.

Barrera was subsequently arrested in Venezuela on September 18, 2012, moved to Colombia and extradited from there to the United States on July 9, 2013, where his reign officially came to an end.

“Thanks to the outstanding agents of the DEA and HSI, this international drug kingpin’s reign is over,” Bharara concluded. U.S. Attorney Robert L. Capers added that: “The sentencing of Daniel ‘Loco’ Barrera Barrera ends his reign as the leader of a violent and ruthless organization who partnered with powerful cartels and terrorist organizations. The dedicated efforts of our law enforcement partners have destroyed Barrera’s empire and today’s sentence sends a powerful message to narcotics traffickers around the world and domestically that we are committed to prosecuting to the fullest extent of the law.”