Most of you probably never heard of John Pappa and probably for good reasons. Pappa wasn't a made member, he didn't belong to a big mafia family and his criminal career didn't even last that long. Still, I think that the story of this very young Colombo crime family associate will interest you. In some ways he's sort of a failed Christopher Moltisante (from The Sopranos), and if it wasn't for him the Colombo family war probably would have had a very different ending.

John Pappa was born on July 19, 1974. You could say John Pappa grew up with the Mafia, his father, Gerard Pappa, was a feared Genovese Family soldier who was known to kill for fun and profit untill he himself was whacked for breaking mob rules. John Pappa was 5 years old when his father was murdered has idolised his father ever since then. He also wanted to become a made member of the Mafia. On his dresser, Pappa had a picture of his dad. On his arm was a simple tattoo tribute, "Pappa Bear." 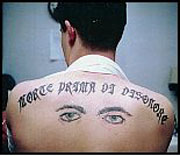 John Pappa didn't become a crazy killer right away, in fact it looked like Pappa wouldn't go the same route his father had taken. After her gangster husband had been whacked John Pappa's mother moved to Holmdel, N.J.. There everything seemed to go just like she had wanted. Pappa did well in school and became a high school soccer star. But little Pappa secretly had different aspirations, he still wanted to become a made Mafia member. "He could not stay out of Brooklyn and Staten Island," said a source close to the Pappa family. "He was straddling two worlds." Pappa was so entranced by the mob, authorities said, that he had the credo "morte prima di disonore" (=death before dishonor) tattooed across his back. Pappa believed it applied to him and his father. Pappa started selling drugs and pretty soon tried to hook up with a crew run by James "Froggy" Galione a Lucchese mobster. John Pappa seemed to fit right in but Galione wouldn't take him in, Galione knew that back in 1975 Gerard Pappa, then a Genovese soldier, had fired the fatal shots that killed his father, a Gambino associate.

But the rejection didn't stop Pappa. Pretty soon thereafter he became close with the Colombo Crime Family. The Colombo Crime Family is one of the most troublesome Families in New York, having had several internal Family wars. In the early 90s the Colombo Family was caught up in a new internal war. This time it was the Persico faction led by official boss Carmine Persico against the faction led by acting boss Vic Orena, Orena started the war by wanting to be the official boss. John Pappa became an associate of a Mafia Family in serious problems and pretty soon his Family faction asked him to perform his duty as an Family associate: He had to go out and kill. The Persico faction was so weakened that they actually called upon the young associates to perform the hits. John Pappa however was willing and able and saw this as a good way to become a made member and so he went out to do his job and do it good. 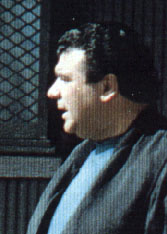 The first official hit of John Pappa during his time as a Colombo Family associate was Colombo Family Capo Joseph Scopo. Scopo was a close friend of acting boss Vic Orena and had aligned himself with Orena against the Persico faction. On October 20, 1993 Pappa and two other Colombo Family associates, John Sparacino and Eric Curcio, went out to Scopo's house to whack him. When the three arrived at Scopo's house in Ozone Park, Queens they found the rival Capo in his car. Sparacino threw open the door and sprayed Scopo's car with a machine gun missing Scopo with every shot. After seeing Scopo was still alive Sparacino ran off. Pappa hid behind a tree waiting to see if Scopo had a gun. Scopo yelled at him: "You got balls, come on. Come on, you need to kill me, kill me you little punk." Scopo then threw his cellular phone at Pappa. Pappa now knew enough and walked over to Scopo with a .380 automatic and shot him eight times from close range. The murder of Capo Joseph Scopo would be the end of the Colombo war, after this hit the Orena faction gave up and the Persico faction emerged as the winner.

With the Colombo Family war at an end John Pappa had made his bones and was almost surely gonna get made. After this successful hit, Pappa got a taste for more. Pappa supposedly had a beef with Anthony "Tigger" Dellavecchia, who was reputedly aligned with James "Jimmy Frogs" Galione, member of the Luchese crime family and the guy who didn't want Pappa in his crew. Pappa believed Dellavecchia had something to do with the murder of his best friend. Because Dellavecchia was allegedly protected by the Luchese family, he was untouchable without approval from Mafia bosses. Determined to extract revenge any way he could, Pappa then allegedly told his cohorts, "If I can't kill Tigger, I'll kill Carmine." (Carmine Gargano jr was Tiggers nephew).

Then, in early July 1994 Gargano got into a brawl with Luchese associate Michael "Mikey Flattop" DeRosa at T-Birds, a Bay Ridge bar. As DeRosa was carried out of the club bleeding from a head injury that night, he snarled to Gargano: "I'm going to kill you." Pappa saw the fight in more practical terms, according to informants: He could kill Carmine Gargano Jr. and everyone would blame Mikey DeRosa. "John Pappa told me, 'It's done. Carmine's gone,'" Luchese mobster Ronald "Messy Marvin" Moran later said, "And they'll never find his body."

In the meantime the bragging about the Scopo hit didn't stop and the three involved started telling their own versions about what had happened. One night Pappa, Sparacino, Curcio and another young hoodlum named Basciano were partying in Basciano's social club. As Pappa and Curcio left, Sparacino told Basciano about his role in the murder and threw a disgusted look at them and sneered: "They think they're a bunch of tough guys. They ain't shit. They're a bunch of punks. Remember the Scopo murder. I'm the one, I did the shooting and those two punks left me there."

After the club emptied out, Basciano, found Pappa and Curcio and told them what Sparacino had said. Pappa and Curcio then told their version: Sparacino had driven off, and that after killing Scopo they had to run three long blocks from the crime scene in front of Scopo's Ozone Park home to a backup getaway car. "Eric looked shocked. Pappa's face turned beet red. He turned around and said: "That mother fucker, I'm going to rip his heart out." "Pappa was going nuts, and I just got in the truck and left," said Basciano. Pappa and Curcio got another young thug named Hennigar to lure Sparacino to a house on Aug. 13, 1994, Hennigar killed him before Curcio and Pappa could get there. Hennigar had shot Sparacino in the back of the head. With Sparacino now dead you'd think Pappa and Curcio didn't need to come over anymore, but for Pappa the fun didn't stop at the killing. When Pappa came over they cut his face and tried to pull it off. Two days later they dumped the body in a car and set it on fire.

John Pappa's campaign to become a made Mafia member ended on the steps of St. Ann's Church on Staten Island on September 26, 1997. Pappa, arriving for a wedding rehearsal for his pal Salvatore Sparacino (the brother of Pappa's third victim), was intercepted by NYPD detectives and FBI agents. "Police, John," Detective Tommy Dades yelled as Pappa walked up the marble stairs of the church with his girlfriend. "Stop! Police!" Pappa spun and scowled. He bent over clutching his stomach and stood straight, pointing a fully loaded 9-mm. pistol. "Put the gun down, John!" FBI agent Matt Tormey said. Pappa ran into the church amid the stunned wedding party. He hurled his gun to the floor and kept running, weaving in and out of the pews with cops in pursuit. "Hey, you guys are unbelievable," the infuriated groom growled. "Show some respect." "Respect?" answered a detective. "This mutt killed your brother." Pappa was arrested just a few feet from the altar. No shots were fired.

Pappa had proven that he was a capable man and fit for Mafia membership during the Colombo war of 1991-93. Pappa was an efficient and bloodthirsty hit man who roamed south Brooklyn armed with an arsenal, prosecutors said. He was convicted of four murders and is suspected in six others including the June 1994 killing of another associate, Rolando Rivera and the thrill-killing of a stranger on a dare. "This prosecution brings the terrible legacy of the Colombo war to a close with the conviction of one of the most dangerous young hitman in the Colombo family," said assistant U.S. attorney Stephen Kelly. Pappa is currently serving four life-without-parole terms plus 45 years for drug dealing and other miscellaneous charges.