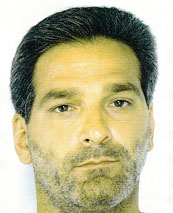 Alphonse Persico is the son of legendary Colombo Family boss Carmine Persico. Alphonse decided to join his father’s business and become a member of the Mafia. His decision would cost him dearly as he would follow his father all the way to a federal prison. 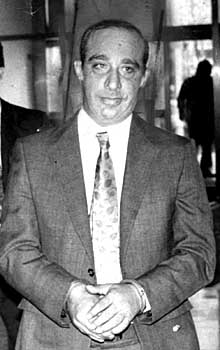 From an early age, Alphonse followed in his father’s footsteps. Carmine Persico (left) was a neighborhood hero and bona fide tough guy. It is no wonder that young Alphonse looked up to his father. But the mob wasn’t his only option in life, he actually was a very good student. The mob, however, was slowly pulling him in. With a powerful mobster as his father, people treated Alphonse with respect as well. And it is no doubt that he liked the perks that ‘the life’ brought with it. After his sophomore year at St. John’s University he dropped out and started working for the mob full time.

With his father at the top of the pyramid, Alphonse quickly rose through the ranks, becoming a Colombo Family capo while he was still in his mid-twenties. In 1983 he was arrested for the first time. But the heroin trafficking charges ended in a dismissal. Three years later, in 1986, Alphonse went to trial together with his father in a big RICO case directed at the Colombo Family. Both men were found guilty and upon sentencing Carmine pleaded to the judge that his son be given a lenient sentence. Alphonse was sentenced to 12 years in prison.

While the two Persico’s were in prison, a fight for control of the Colombo Family broke out on the streets of New York. Carmine Persico had made it clear he wanted to remain in control of the family and that his son would take over as boss upon his release in 1993. But a faction led by Vic Orena (photo right) disagreed and began fighting a bloody war against the Persico loyalists.

The war left many men dead and wounded and caused law enforcement to up its pressure. Dozens of Colombo mobsters were arrested and sentenced to lengthy prison terms because of acts stemming from the war. Alphonse Persico was charged with authorizing plans to murder seven men who were loyal to Orena. During a 1994 trial he was acquitted of the racketeering charges. In 1995 he was released from prison and finally took over as boss of the Colombos.

As a boss Alphonse started spending more and more time in Florida to avoid law enforcement scrutiny. But for a man like Allie Persico the heat does not end by simply moving to a different state. During Labor Day Weekend in 1999, he was enjoying cruising around the Florida Keys on his 50-foot speed boat named “Lookin’ Good” when the US Coast Guard stopped him. While they searched his boat they found two loaded weapons; a Browning .380 semi-automatic pistol and a Mossberg 12-gauge shotgun. Alphonse was not allowed to carry any weapons because of his 1986 RICO conviction. The gun charges would eventually sent him back to prison for 18 months. 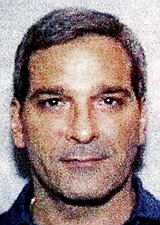 Allie Boy’s legal problems weren’t over though. In order to strengthen his position as boss of the Colombo Family he had ordered the execution of his underboss William “Wild Bill” Cutolo. Cutolo went missing on May 26, 1999 and was never seen again. To those involved in the Colombo Family business it was clear that Alphonse had just erased a serious threat. Cutolo’s son, William Junior, knew this too, and contacted the FBI several weeks after his father’s disappearance. Cutolo Jr. agreed to wear a wire and give information about the criminal business of Colombo mobsters.

But the murder of “Wild Bill” Cutolo still loomed in the background. All the FBI needed was a body and some witnesses. In 2004 prosecutors felt they had enough evidence to indict Persico and bring him down in court. In September 2006 Alphonse Persico and underboss John “Jackie” DeRoss stood trial for ordering the murder of William Cutolo. While the first trial ended in a hung jury, the second trial saw Persico and DeRoss being found guilty of ordering and plotting the murder of Cutolo.

On February 27, 2009 Alphonse Persico, aged 55, was sentenced to life in prison without parole. He will now live the same life as his father. A life behind bars and away from his loved ones.

Wow,does the saying you reap what you sow come to mind when reading this article or is it just me? I can understand being a so called "man of honor" in this type(LCN)of society. But to believe that a son would stand by and let these "men of honor" murder "my dad" would be beyond words. To me, his son did what any son who loves his father would do.My utmost respect to Junior Cutolo.