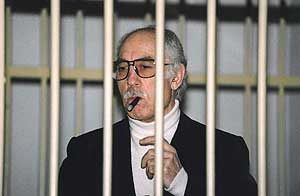 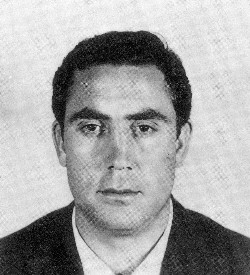 Giuseppe Calò was born in Palermo in 1931. In 1954 he killed Pietro Scaletta in order to revenge his father and the same year he became a “man of honour” of Porta Nuova family; in 1962, when the old boss Carlo Brandaleone died, he replaced him as the family boss. At the beginning of 1970s he took part in the Provincial Commission as “capomandamento”. He supported Totò Riina during the mafia war at the beginning of 1980s and became one of the most loyal allied of “Corleonesi” faction. At the ending of 1970s he went to Rome under the fake name of Mario Agliarolo; in the Italian capital he was supported by local Cosa Nostra “decinas”, terrorists, and members of Banda della Magliana but he also had strong links with several politicians, freemasons, secret services agents, bishops and bankers.

He was nicknamed “The Cashier” because he managed the most important financial business of the mafia. He was accused to be involved in some of the most obscure and mysterious mafia misdeeds, included the murders of journalist Pecorelli, the bankers Sindona and Calvi, the lawyer Ambrosoli, the judges Chinnici, Falcone and Borsellino, and the so called “904 train’s slaughter”; Carmine Pecorelli was murdered in Rome on Mars 20th 1979; according to the inquiries the reputed shooters were the “man of honour” Michelangelo La Barbera and the terrorist Massimo Carminati; Pecorelli would be killed because Andreotti didn’t like his articles about politics.

Giorgio Ambrosoli was murdered in Milan on June 12th 1979; Roberto Calvi was hanged in London on June 18th 1982. Michele Sindona was poisoned inside Voghera prison on Mars 22nd 1985. On December 23rd 1984 a bomb attack against a train in San Benedetto, between Florence and Bologna, caused 16 dead and 100 wounded.

In 1978 the Commission of Cosa Nostra asked him to contact the Red Brigade terrorist group in order to free the politician of DC party Aldo Moro, but he answered that Andreotti didn’t want it; a clear signal of his huge connections and knowledge inside national politics. Giuseppe Calò was arrested in Rome on May 31st 1985; he was surprised inside an elegant apartment together with “men of honour” Antonino Rotolo and Lorenzo Di Gesù. Sentenced to life for several murders, his position inside Cosa Nostra is uncertain; some people say he’s still the boss of Porta Nuova family, others say he retired in 1990s.

I saw two mistakes here: Giuseppe Calo, known as "Don Pippo Calo", nicknamed "La salamandra" for his ability to escape even from the worse situations, and referred as "the cashier" for his role inside cosa nostra, has been arrested in Rieti inside a villa of Poggio San Lorenzo on March 30th, 1985, and not in Rome on May 31st, 1985.

Plus, I don't know about this Lorenzo Di Gesu', but Antonino Rotolo wasn't arrested with Calo', but he was arrested on June 20th, 2006.