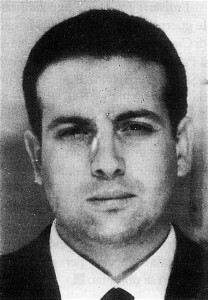 Stefano Bontade was born on April 23, 1939 in Palermo. His father was Francesco Paolo “Don Paolino” Bontade, the boss of Santa Maria di Gesù family, one of the most powerful families of the city of Palermo. Born in 1914, he was a farmer and he ran the fields and the wells around Villagrazia, Santa Maria di Gesù, and Guadagna neighbourhoods, which before the 1960s were rural areas. He was introduced into organized crime by his father, Stefano’s grandfather, and quickly became one of the most powerful bosses of Palermo area. His word was the “law” for the people. He was designated boss after the death of Andrea Messina, the old boss of Santa Maria family.

Stefano was introduced into Cosa Nostra very early and in 1964, when he was 25, he became the official boss of the family because of his father’s disease. At the beginning of 1970s he took part in the triumvirate, with Gaetano Badalamenti and Luciano Leggio, which ran Cosa Nostra for a few years, before the Commission was reorganized after the repression of the State.

Thanks to his politics and freemasons connections, Stefano was a real authority inside Cosa Nostra; he was in friendship with Salvo Lima, once Palermo’s mayor, Giovanni Gioia, senator of DC party, and several others, including Italian Prime Minister Giulio Andreotti. But when his power seemed to be untouchable, an obscure enemy was on the rise: the “Corleonesi” led by Totò Riina. They wanted to replace him, his political connections and his business, including drug trafficking and cigarettes smuggling. The Bontades had a lot of refineries around Palermo province, one of these was directly ran by Giovanni Bontade, brother of Stefano, murdered in 1988. The first signals Riina sent to Bontade were the kidnappings of Pino Vassallo, son of an important entrepreneur, Luciano Cassina, son of the Count Arturo, and Luigi Corleo, one of the richest of Sicily, father-in-law of Salvo’s from Salemi. The mafia war reached the top on April 23, 1981, when Stefano was shot to death while he was driving his armoured car. After him about 900 “men of honour” were killed in Palermo from 1981 to 1983; that was the end of the last member of the “Old Mafia”.

Comment by Christian Giuliani on February 20, 2011 at 2:47pm
Here has to be mentioned, because it is very important, that Stefano "Il principe di Villagrazia", or simply "Il Principe" Bontade (or Bontate, for a spelling mistake of an officer on his birth certificate), was a strong ally of Salvatore "Totuccio" Inzerillo and Tommaso Buscetta, aka Don Masino or Il boss dei due mondi (The boss of 2 worlds).