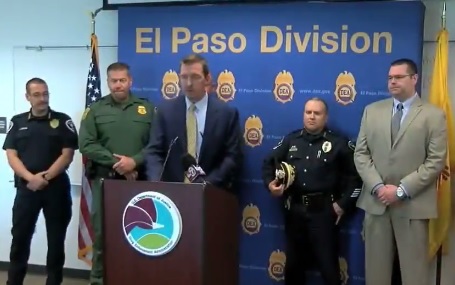 A DEA-led investigation has brought down a nationwide Mexican drug organization that smuggled large quantities of heroin, meth, and cocaine from Mexico to the United States. Twenty-eight individuals were indicted on April 28 and face drug trafficking and money laundering charges, but the group’s leader, 30-year-old Luis Angel Briseño-Lopez remains a fugitive and is believed to be residing in Juarez, Mexico.

His organization not only smuggled the drugs in from Mexico, but also distributed the product in New Mexico, Texas, Kansas, Kentucky and Illinois. After a lengthy 16-month investigation, federal agents seized approximately 30 kilograms of heroin, 64 kilograms of methamphetamine, 17 kilograms of cocaine, 20 kilograms of marijuana, 24 firearms, $102,000 in currency, and three vehicles.

Special Agent-in-Charge Will R. Glaspy of DEA’s El Paso Division told reporters, “Today law enforcement in New Mexico and West Texas has dealt a severe blow to a drug trafficking organization with ties to a Mexican drug cartel. Through the cooperation of numerous law enforcement organizations we have removed criminals from our communities who have been involved in smuggling, transporting, and distributing drugs.”