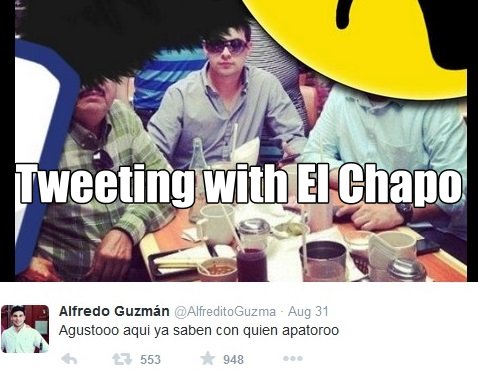 A photo of a young man sitting at a restaurant with two men by his side, their faces obscured by a cartoonish smiley. Beneath the photo, in Spanish, the text: “August here. You already know who with.” Underneath all of that the place where the photo was taken, Costa Rica. Why is this news? Because this photo may have revealed the location of “El Chapo” Guzman, the world’s most wanted drug lord.

How is that possible? Well, because the young man in the photo is Jesus Alfredo Guzman Salazar, Joaquin “El Chapo” Guzman’s 29-year-old son, who himself is a high-ranking leader of the Sinaloa drug cartel and wanted by U.S. authorities. Most importantly, the man on the left shows a strong resemblance to his fugitive father "El Chapo" Guzman (right).

Joaquin Guzman escaped from a maximum security prison near Mexico City in July using an elaborate mile-long tunnel which had been dug into his cell by accomplices. While taking a shower Guzman slipped away through a hatch in the floor leading into the tunnel and on to freedom.

It was his second prison break – the first occurring in 2001. While on the run he allegedly posted several messages on Twitter in which he bragged that if he was arrested he would simply escape again.

He has not been seen since.

U.S. authorities put out a $5 million dollar reward for information leading to his arrest, but with “El Chapo” Guzman being worth over $1 billion dollars and the leader of an army of elite commandos, thugs, killers, gangbangers, and corrupt policemen even the greediest man will think twice about taking the U.S. up on its offer.

Perhaps what is needed most is stupidity, a slip-up by one of the members of Guzman’s inner circle. Like the tweet by Guzman’s son in which he forgot to disable his location and revealed from where he tweeted the photo (see screenshot below, right). 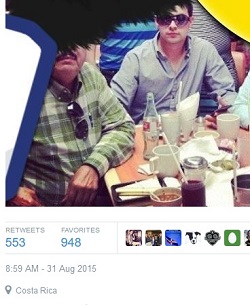 Is that where father and son Guzman are hiding? Though many believed the location to mean Costa Rica the country, others pointed to the village of Costa Rica in Sinaloa, Mexico, which would make more sense as it is in an area firmly controlled by Guzman’s organization.

But would Guzman’s son be so stupid? His use of Twitter shows he is confident the law can’t touch him, he also comes across as arrogant, but is he dumb? Authorities in Costa Rica, the country, are taking no chances and are currently investigating whether the most wanted pair is within their nation’s borders.

We at Gangsters Inc. tend to think Guzman's son is taking all of us on a wild goose chase that will keep us busy while “El Chapo” makes his next move.

In the meantime, follow us on Twitter for the latest on this and other stories from the world of organized crime and the Mafia.