Do you have what it takes to be a big bad crime boss? Find out in the brand-new True Crime Legends board game 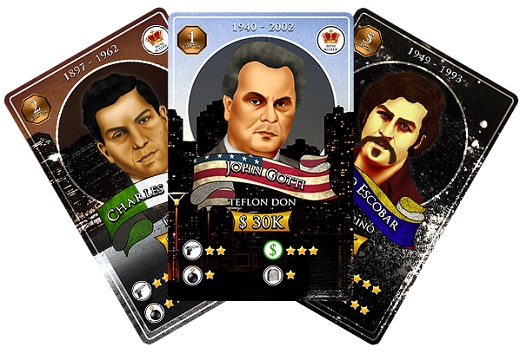 A brand new board game will give players a chance to find out if they have what it takes to be a successful crime boss. In True Crime Legends you can recruit infamous crime figures like Pablo Escobar, John Gotti, and Lucky Luciano into your syndicate! You need to earn $1 million to win the game and eliminate your rivals, better known as friends and family. “When you are playing the role of a Mafia boss, people tend to try to get away with anything they can!”

With Mafia III hitting stores and smashing the box office, it is clear that people love mob-related games. And where there is a demand, the maker of True Crime Legends aims to please by pushing the supply and giving the people what they want. His new board game will allow you to recruit the most notorious real life crime bosses and hitmen the world has ever seen in a bid to become top dog while playing against family and friends at home or online.

Wherever you play, this is the kind of game that will bring back that crazy atmosphere like only board games can. You know the kind of things that happen when you and your pals are situated around a board, one is winning, one is definitely losing, some barely holding on, tempers rise, trash talking begins and things get funny really quick as everyone’s competitive edge comes out like never before.

It’s exactly what True Crime Legends creator James Martin is going for. “I loved the classic Monopoly growing up,” he tells Gangsters Inc. “Stronger opponents would test your persuasive abilities and question your motives whereas weaker opponents would cave in quickly to your proposals. It was the human element of the game that had me hooked.”

Martin grew up near London, England, and has spent his life testing his spirit, he says. “I have worked as a teacher, boxing coach and also in sales and marketing,” he says. “I love sports, particularly football and boxing. I had a few pro fights which I found to be a great test of character. I am extremely passionate about winning although I always believe in congratulating the better person on the day.”

It’s this competitive streak that also pulled him towards Monopoly. “I liked it because you had your own properties and cash and you were free to make proposals, outside of the games parameters, which would directly affect your chances of being a winner. You were the boss and sometimes your mental resolve counted as much as your cards,” he explains.

“However, I felt as if there were never enough tactical avenues I could pursue in my quest to win and sometimes you simply had to 'play the hand you were dealt’ as they say.”

Once he came to this realization, his mind began turning and storming thinking of a game, one he would create himself. One that would be easy to pick up and that would place the player in control of an empire allowing complete freedom of choice with many different strategic roads to victory.

The foundation of True Crime Legends had been laid.

His game idea got more form at a friend’s wedding in South Africa. Staying with several of his friends in a very quiet town with no nightlife party scene to speak of, the group was mesmerized by “The Iceman,” the book about the life of serial killer and self-proclaimed mob hitman Richard Kuklinski. “A fantastic read,” Martin recalls. “We talked about how cool it would be if characters such as Richard Kuklinski, Pablo Escobar, Al Capone, etc. were all recruitable in some kind of board or card game.”

Once the seed was planted, Martin immediately went to work. “When I got back to the United Kingdom, I began working on what was then simply called 'Gangsters'. As we tested the game I would develop improved versions taking us up to 'G3' as it was known. It was at this point that people playing the game found it to be highly addictive and were asking me why it wasn’t commercially available. So during the next twenty or so months I refined G3 for the commercial market and produced True Crime Legends incorporating everything we had learned from over a thousand hours of testing into one gangster themed strategy board game.” 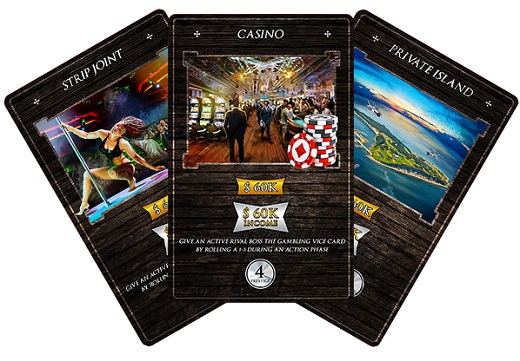 The game itself works like this: Each player starts with a syndicate, cash and 4 boss cards. If you have ordered your own custom boss cards, you will start with yourself as the boss. Every player will have a syndicate mat which has 1 boss slot, 5 asset slots, 5 item slots, 5 character slots and a vice slot. As the game progresses players will fill their mats to grow their syndicates.

During the ‘market phase’ players can purchase assets, items and recruit characters. Assets like the speedboat, club, and diamond mine give bonuses such as better income, increased contraband weight potential and prestige. Items such as the shotgun or lock pick can be used to equip the characters in your syndicate, making them more powerful.  Players can recruit characters and place them in their syndicate slots from ‘accountant’ all the way up to 'underboss'. Placing correctly can be very tactical as your underboss will take over from your boss if they are killed and your hitman has the ability to collect bounties for killing other characters.

You will have the opportunity to level up your boss through 4 levels making them increasingly powerful. You will use prestige points gained from assets to upgrade. This becomes very important as to win the game you not only have to reach $1 million but you must have an active boss that is not in hospital or jail. 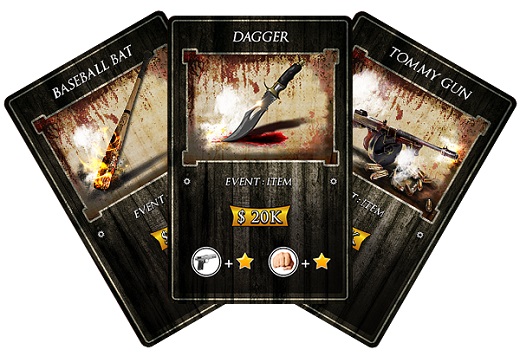 The ‘actions phase’ is where the core game mechanics come into play. Each player takes it in turns to use each of their character skills. Skills include assault, murder, kidnap, bomb, persuade, make money, steal and retaliate. Characters that have better card stats have more probability of successfully using their skills with a dice roll.

“The game mechanics are set up so you have complete freedom of choice,” Martin adds. “Many characters have multiple abilities and you must select one ability per phase so you may choose to be peaceful and make money or you may choose to attack other players in a variety of ways. Plan wisely who you attack because retaliation allows the attacked characters a chance of revenge if you miss. So if you want to assault another character you will want to consider your targets retaliation level before proceeding. You don't bring a knife to a gun fight!”

In the ‘smuggle phase’ players will take turns to sell product on a fluctuating market. You can increase product from your characters and your assets. The higher the level of contraband the higher profit potential and higher the risk. Characters have different contraband levels so having someone like Pablo Escobar in your syndicate will allow you to move a very large amount of product. Having more contraband to sell can make huge profits but can also land you in jail or see you to bankruptcy.

In the ‘events phase’ random role playing situations take place. Your boss may have over indulged and decided to play Russian roulette for example. You may also pick up ‘vices’ which may end up with you owing debts to specific asset owners. For example, gain the gambling addiction vice card and you will owe money to the owner of the casino every turn. Don’t fancy paying the owner of the casino every turn? Blow up their casino!

REAL LIFE GANGSTERS AND CRIME FIGURES: FROM ESCOBAR TO GOTTI 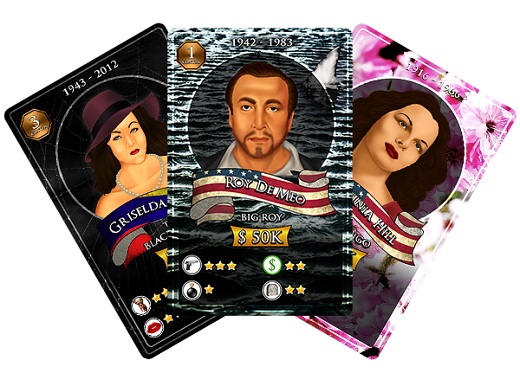 True Crime Legends holds no boundaries in picking the game and expansion pack characters except that the character in question must be deceased and have operated in the 20th Century. “The standard game will come with 50 character cards,” Martin tells us. “This has made for an extremely interesting and wide variety of characters.”

But it doesn’t end with a set list of names, Martin promises. “Expansion character packs will also become available next year after canvassing the opinion of our fan base to see which kind of additional characters they would like to have available.”

With all these real life names – past and present – incorporated into the game, how factual will the storylines be? “The first thing to note is that the game is set in an alternative historical setting that imagines the underworld legends of the last century co-existed in one particular time period,” Martin explains. “I have personally studied criminal history extensively and applied this knowledge to the character cards to the best of my ability.”

GET YOUR GAME ON: WHACK YOUR RIVALS AND PLAY LIKE A BOSS

So far feedback has been great, Martin says. “Many of the people who played the game find it to be highly addictive and enjoyable. Rivalries can run way past the climax of a single game! I had to put some very solid game rules in place during these times because when you are playing the role of a Mafia boss, people tend to try to get away with anything they can!” Martin says with a big grin.

If you are eager to play the game yourself, then Martin has some good news. Martin: “The game will be available to purchase from Kickstarter on the birthday of Charles Luciano, November 24th 2016 and buyers will be able to purchase the physical version and the tabletop simulator that can be played on PC. There will be a number of pledge levels that have bonuses such as having your own customized boss card and having your likeness appear on one of the game cards.”

Why Kickstarter? “I have invested countless hours and over £12,000 of my own money to get True Crime Legends to where it is now,” Martin explains. “It has been my passion, my labor of love. We are launching the game through Kickstarter in order to raise enough funds for a large initial minimum order quantity from our manufacturer. The game itself is 95% finished and only requires a little more artistic work on some of the cards. If we miss our target the game cannot be manufactured. We are hoping that with our fans and supporters we will hit our target and get this game produced.”