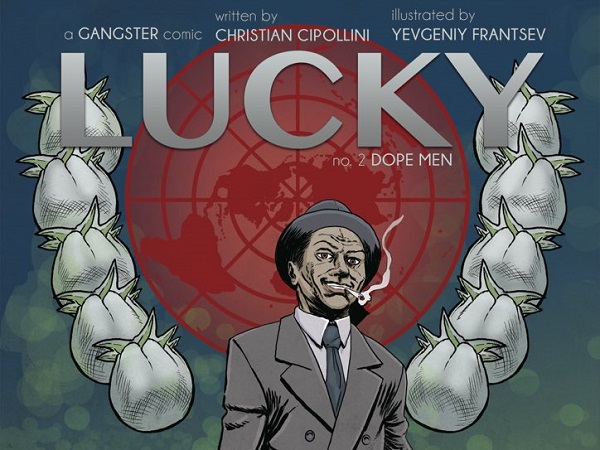 Infamous New York mob boss Charles “Lucky” Luciano’s story is never finished being told. So many rackets, so many murders, so much cash, and so many intriguing gangsters. In the comic book series LUCKY, author Christian Cipollini takes readers on a journey into the netherworld of America’s first “Dope Men”.

“The first issue of LUCKY: A Scar is Born set the stage in pointing out how Lucky Luciano has always been a bit of a misunderstood, or maybe better said - misreported figure - from how he got the scars to how he earned the nickname,” Cipollini tells Gangsters Inc. “That all started in the late 1920’s, the same time he got his start freelancing across criminal playing fields – from Arnold Rothstein and Joe Masseria to The Diamond Gang.”

Aptly titled Dope Men, the second issue of LUCKY focuses on how Luciano got his start in the drug trade. “The story picks up with a brief flashback to show Rothstein’s influence on Lucky and his colleagues,” Cipollini tells enthusiastically. “Then it goes full throttle into 1930 when some of Rothstein’s former minions were transitioning out of international narcotics dealing, others were rising to take the reins, and how the government - then basically in disarray over the whole elusive web the bad guys had begun weaving as far back as 1921 - created the Bureau of Narcotics to combat the problem.”

For as long as one can remember, Mafiosi have felt the need to shun drugs – mostly by denouncing it in public while dealing it in the shadows. It was seen as something that was beneath them and many claimed that they would never be involved in such a dirty business, even if they were.

Say no to drugs?

This hypocrisy made Cipollini want to make a point. “The mob not only dealt narcotics… the mob literally engineered the prototype of the modern day ‘Cartel,’ and many of the up and coming gangsters - who would become infamous for very different reasons - were deeply involved in the drug building empire that was largely funded by Arnold Rothstein,” he says.

With Luciano being viewed as one of the American Mafia’s founding fathers, Cipollini found it especially interesting to explore Lucky’s involvement in this notorious racket. “It’s something I’ve quietly researched for years. When the opportunity to do a comic book series came to light, I knew immediately there would have to be at least one issue solely focused on this topic. In fact, I think I was giddy like a child with a new toy when I started writing this one.”

Cipollini: “Being the nature of comics and graphic novels, the story has to be largely told through visuals and very concisely, which meant I had to determine from day one what segment of Lucky’s long history to focus on.  I chose to cover from late 1920s up to and including his 1936 incarceration, across four individual chapters/issues, and weave in some pivotal moments that have been perhaps missed by a lot of accounts of his life.  I thought it was a great way to even compliment my book on Lucky, as I too discovered additional things after that was published!”

Furthermore, he adds, “My editor had told both myself and our artist Evgeny to ‘go ahead and up the game’ on this one, i.e. bring in more characters, get gritty, don’t hold back. I was beyond excited to tell this part of the tale and introduce some of the truly unusual and amazing characters who were involved.”

Cipollini: “And just for the hell of it, but more of an homage really, there’s even a brief cameo of myself and the one and only Tera Patrick - whose advice, creative support and friendship was a big part of why I did the comic book in the first place! Not to give away all the secrets of the series, but there’s a little foreshadowing in Dope Men of who you’ll be meeting in upcoming issues as well, so let’s just say Big Al and a few bad boys from Brooklyn will be coming along down the line soon!”

With a star-studded cast of big gangland names, you’d be surprised to hear that Cipollini personally is fascinated with a couple of the lesser-known characters of this true mob drama. “Everybody who follows underworld history of course knows the big names, but those prominent figures were very much intertwined with gangsters who were somehow missed or brushed over in most historical texts; shadowy figures of far greater importance to the bigger picture than often given credit for,” he explains.

“Plus, some of them are just so damn interesting, be it their respective personalities or how they impacted an underworld situation. Two of my personal favorites are definitely Augie Del Gracio and George Uffner. And of the books and comic books I’ve written I don’t have a singular favorite per se, but that said - I was definitely full of a fiery passion when penning Dope Men.”

For those of you thinking you’re too old for comic books, Cipollini has a message. “The comic books are intended to be enjoyable by a broad audience yet maintain the factional element of a historical true crime story that mob aficionados could appreciate,” he says.

“Seeing Lucky and his entire entourage brought to life in such a visually stunning way, especially in scenes that we have no literal photographs of, is pretty incredible, I think. We weren’t there ourselves to see it all, nor were we flies on the wall to hear it all, but that’s where a comic or graphic novel can really bring everything to life. A good balance of authentic, corroborated situations and dialogue, with a little artistic license where necessary, to ultimately give the reader a considerably detailed and entertaining view of one of world’s most intriguing criminal figures.”

LUCKY 2: Dope Men is available online at Comixology. You can find Christian Cipollini’s books at stores near you or at his website www.ganglandlegends.com and talk to the man himself at social media on Twitter and Facebook.