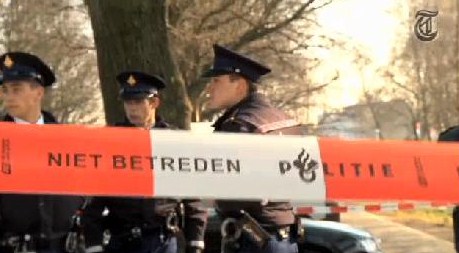 The murder, last week, of Dutch crime boss Stanley Hillis (64) was big news in The Netherlands. The media labeled him the most powerful gangster in the country, and his murder, in broad daylight, was a huge surprise. Immediately after the murder, police asked the public to come forward with information about the possible assassin or assassins. But here’s the kick: the police already knew what the assassins looked like.

This morning, newspaper De Telegraaf reported that while Hillis was being riddled with 37 shots fired from an automatic weapon, police were both watching and listening. Two detectives were parked in a van right next to where Hillis’ car was parked. Another surveillance team was parked nearby in another car and a police chopper was flying over head. Police had known about the meeting Hillis was to have with former associate Donald G. and planned on catching the meeting on tape.

When the hit man fired his weapon, the two detectives immediately hit the deck of their van in fear. While Hillis was being shot to death only two meters away, they did nothing. In their defense, the detectives were unarmed and thus no match for a cold-blooded assassin carrying a loaded weapon.

As the hit man fled the scene by getting into an awaiting car driven by a partner, the surveillance team went into pursuit. They also notified the helicopter crew which then took over, only to lose the car in traffic. A spokesperson for the National Police told De Telegraaf that they are saddened that the assassins managed to escape, but added that they had planned and equipped for a surveillance operation only. 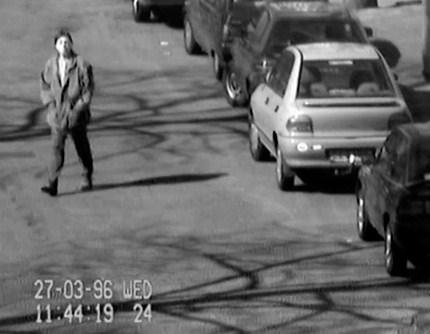 Interestingly enough, this isn’t the first time a Dutch gang boss has been shot while police had him under surveillance. In June of 2010, it became known that police had videotaped the failed attempt on gangster Cor van Hout’s life. The video (right) shows how a man walks up to his car and shoots Van Hout through the window. The man then walks away. Seconds later, Van Hout can be seen staggering away from his car. The hit took place in 1996 and the video was kept secret by police for all those years.

In the United States, a hit caught on tape has happened as well. Though, the law enforcement personnel seemed better prepared for the mayhem that occurred. As two rival factions battled over control of the Philadelphia La Cosa Nostra Family in the early 1990s, there were hits and attempted hits in both camps. The FBI had both parties under surveillance.

Joseph Ciancaglini was a member of the ruling faction within the Philly mob. Boss John Stanfa had made him his underboss. This made him a prime target for the rival faction. When Ciancaglini arrived for work a few minutes before 6am, FBI agents videotaped his every move from across the street.

In his book “The Last Gangster” author George Anastasia details what went down in the following minutes:

“At 5:58:18 a station wagon drives past the restaurant, traveling from right to left on the television screen. In the dim predawn light, it is impossible to determine the make or the color of the vehicle. Inside it are the men who are coming that morning to kill Joe Ciancaglini. A sedan, with a lone driver, follows the station wagon. Both disappear to the left, off the screen.

At 5:58:40, three or four shadowy figures -- it's difficult to tell -- come running from the direction of the station wagon and burst through the front door. The FBI bug that has been planted in the restaurant picks up the next five seconds.

Now there is audio to accompany the video. Susan Lucibello screams; there is the sound of rapid footfalls; then at least two of the shadowy figures disappear into the back storage room where Joey Chang is getting ready for what he had assumed would be just another workday. There is the staccato sound of gunfire, six or seven shots. More screams from Lucibello. The rapid shuffling of feet as the shadowy figures head out the door. A man's voice yelling "Move, move!" as the gunmen exit and disappear offscreen to the left, toward the station wagon.”

As technology becomes more sophisticated and law enforcements starts using it more, gangsters will find themselves and their gruesome acts on videotape a lot more frequently. If used correctly it will be their downfall in court. But Dutch police are still clueless as to who the hit man in their high profile murder case is. Despite two surveillance vans filled with detectives within very short distance, they have no apparent lead. In this case, technology isn’t helping police capture criminals. It is only making them look like fools in the eyes of both the public and the gangsters they are trying to catch red handed.