Escobar versus Cali: The War of the Cartels

The following is an exclusive excerpt from Ron Chepesiuk’s new book Escobar versus Cali: The War of the Cartels. We hope you enjoy it!

The Cali Cartel brought in Jorge Salcedo to oversee its security work. Codenamed “Richard” by the Cali cartel, Salcedo became an important member of the Cali cartel’s intelligence and security team and typical of the type of talented employee the cartel liked to hire.

The son of a retired brigadier general in the Colombian armed forces, Salcedo had studied economics and mechanical engineering in the United States and was fluent in English. After joining the military, he became a member of the Brigade of Cali, where he acquired expertise in arms, communications and explosives. He distinguished himself in the fight against M-19 guerrillas during the 1980s, until the group disbanded and integrated itself into Colombian society.

Through his contacts in the Cali-based Third Brigade, Salcedo became good friends with Mario del Basto, the Cali cartel’s head of security. Salcedo had excellent skills, including knowledge of computers and the cartel recruited him. Salcedo eventually became a trusted intimate of the Rodriguez brothers. DEA agents who later worked with alcedo described him as cultured, highly intelligent, charismatic and remarkably cool under pressure.

In August 1988, Salcedo devised a plan to bring in a team of British mercenaries to kill Escobar. Salcedo’s con tact was the British mercenary David Tomkins. To develop the plan, Salcedo went to London to meet with Tomkins and his partner Robert Peter McAleese. Before he became a mercenary, Tompkins had been in and out of jail since the 1960s. Tomkins mercenary career began in Africa, and over the years, his thirst for adventure took his all over the world, from Afghanistan to Croatia to Uganda where he was involved in a plot to kill Idi Amin. In Angola, Tomkins became one of the famous “Dogs of War” and an explosives expert under the notorious mercenary leader, Colonel Callan.

Born in Scotland, McAleese was a former British paratrooper and former member of the SAS, who left the British military to become a mercenary.

McAleese had also seen extensive action in Africa. After suffering a serious parachuting accident, he returned to the United Kingdom when he hooked up with Tompkins.Before his meeting with Salcedo, Tomkins had been drawn into the Colombian civil war when he met a Colombian army officer through a contact in the arms trade.

The officer asked him to recruit a team of mercenaries that could destroy the headquarters of Colombia’s FARC guerrilla group. At the time, FARC was involved in a death struggle with the Colombia’s drug cartels over control of the narcotics trade. The operation was essentially funded by Medellin drug lord Jose Gonzalo Rodriguez Gauche. Tomkins was to be paid about $2,000 a week, plus he could keep any loot he found at FARC headquarters. Tomkins teamed up with McAleese to recruit a 16-man mercenary team and then headed for Colombia.

After meeting in a London bar to plan, Rodriguez Gacha funded the operation. Salcedo assured Tomkins and McAleese that they would not have to worry about the Colombian government, and they were promised luxurious accommodations in a villa near Cali, as well as a substantial budget to buy weapons.After arriving in Cali, the team was instructed to keep a low profile and to try and act like tourists. Easier said than done.

The team began frequenting a bar run by an expatriate, and, soon, their visits led to arguments and drunken brawls. Salcedo moved the mercenaries to a secluded ranch owned by Miguel Rodriguez Orejuela. In this quieter setting, the Tomkins team trained regularly while they awaited orders. The plan was to launch a helicopter attack on Hacienda Napoles, Escobar’s 7,000 acre private estate, located about 80 miles from Medellin. The mercenaries planned to launch the mission when they knew Escobar would be at his ranch. It was a bold mission. To reach Hacienda Napoles from Cali, the mercenaries would have to travel three hours across thick jungle. Meanwhile, the Cali cartel was hard at work trying to track the radio signal of Escobar’s mobile phone.

The cartel positioned a team of spies in a hideout overlooking Medellin where they attempted to intercept Escobar’s mobile phone signals. On May 31, 1989, the spies sent word back to their leaders in Cali that Escobar would be for sure at Hacienda Napoles to celebrate his soccer team’s victory in Copa Liberadores de America. It was the first time a Colombian team had on the tournament in 41 years.

A pair of Vietnam era Huey helicopters painted to look like police choppers were readied. Tompkins and his team were worried that one of the Hueys would have difficulty carrying the commandos and munitions to the drop zone. But Gilberto Rodriguez Orejuela (right) was insistent that the Brit mercenaries launched the mission, which became known as Operation Phoenix. The spy team arranged for someone to call Escobar promptly at 11 am. The person had to hear Escobar’s voice or the mission was off. When the caller confirmed that Escobar was at the ranch, the four former Cali cartel godfathers, who were back in Cali, monitoring live reports from the scene, cheered.

The mission, however, was in trouble. Near the drug zone, the Huey carrying the heavy load was low on fuel. The mission, moreover, could not handle the topography and weather. The 8,000 foot mountain range and the heavy clouds blocked the pilots’ view of the range and the plane crashed.

The pilot died, but, miraculously, Tomkins and MacAleese survived. When no help came from Cali, the two men spent three days walking out of the jungle and evading capture and death, even though they were in the heart of Escobar country. McAleese suffered broken ribs and a sprained back, Tompkins, mere bruises. In June 1989, Tompkins returned home to the United Kingdom via Panama. The Cali cartel still hoped to kill Escobar at Hacienda Napoles, but the Colombian authorities eventually seized the ranch and Escobar could not go there. 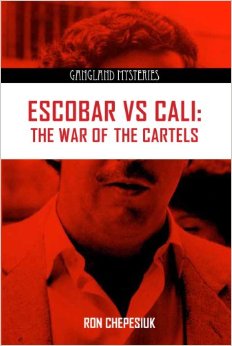 Always the adventurer and risk taker, Tomkins was still keen on killing Escobar. Tomkins told a Colombian reporter, “Right now, we have three choices: run, hide or go ahead, There is nowhere to run and we can’t hide. So we are determined to go on until we finish what we came here to do.” In 1991, Tomkins once again became involved with a “Get Escobar” scheme, when U.S authorities claimed a drug gang (not the Cali cartel) offered him to do the deed.

The plot was to involve a Vietnam-era fighter jet and 500 pound bombs. U.S. Customs agents in Puerto Rico discovered the plot and set up an undercover sting in which Tompkins handed over $25,000 to undercover agents in return for what Tompkins thought would be a shipment of arms. Before he was arrested, Tomkins was tipped off, and he fled back to the United Kingdom.

In 1994, Tomkins was indicted in the Southern District of Florida for conspiracy to violate arms export laws.McAleese managed to avoid trouble with the law, and in the mid 1990s he went to work training Russian bodyguards in Moscow and later security work in Algeria and Iraq. McAleese remained free until 2003 when U.S. Customs arrested him at the Houston International Airport as he tried to enter the country. McAleese had traveled to the U.S. to attend survival training courses at Fort Bliss, Texas, with plans to travel to Iraq where he would help with the war against terrorism.

It was not be the last time that the Medellin and Cali cartels would go outside the country seeking aide in their war to the death.

Ron Chepesiuk is award winning freelance investigative journalist, documentary producer and Executive Producer and co-host of the Crime Beat radio show (www.artistfirst.com/crimebeat.htm/) . He is a Fulbright scholar and a consultant to the History Channel's Gangland documentary series. His true crime books include Black Caesar, Black Gangsters of Chicago, Gangsters of Harlem, Gangsters of Miami, and Sergeant Smack: The Lives and Times of Ike Atkinson. Kingpin, and his Band of Brothers.

In !989 my father was a innocent victim of medellin cartel violence when on Semptember 4th while on line at the Rio Negro airport outside of Medellin he was shot as well as many others when a 15 year old sicario assasinated a man who"s father was the owner of Pintuco Paints in Colombia. The man in front of my Father was killed and my Father survived but lost his right foot to amputation, I am very interested in acquiring this book and reading it because I seen firsthand the cartels( Medellin,Cali) destruction in Colombia and the streets of Queens in New York City which became a huge storage locker for the cartels cocaine and basuco which turned hundreds of people and lot of good friends into addicts thus cutting some of their lives way to short.

Hello Rudy, my name is Alexander and I am currently writing a scientific paper on Pablo Escobar and his effect on crime in Kolumbia. If you are still active on this site please contact me because I am very interested in your story and would really like to ask you a few questions if that would be possible.