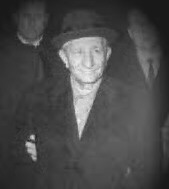 Carlo Gambino was born on August 24, 1902 in Palermo, Sicily. He arrived in the US in 1921 and settled in Brooklyn with help of relatives and friends who had already made it their home. He would later help his two brothers when they arrived in the US. In the United States Gambino got involved in crime and in 1930 he was arrested for larcency in the operation of the "handkerchief pill game". By the 1930s he was heavily involved in bootlegging. From the money he made through bootlegging he bought restaurants and other legit fronts. After prohibition in 1939 Carlo Gambino continued the bootlegging and in May 23, 1939 received a 22 month sentence and a $2.500 dollar fine for conspiracy to defraud the United States of liquor taxes. Eight months later the conviction was thrown out and Gambino was a free man again. During the second World War Gambino made millions from ration stamps. The stamps came out of the OPA's offices. First Carlo's boys would steal them. Then, when the government started hiding them in banks, Carlo made contact and the OPA men sold him the stamps. All in all by the wars end Gambino had made millions through the stamps and the bootlegging.

Gambino also got involved in the narcotics trade. Gambino traveled to Palermo several times to set up the routes and make the deals. Using Sicilian men Gambino imported the narcotics into the United States. By 1957 Carlo Gambino had moved up in the Mangano Crime Family, he had become Underboss of Albert Anastasia. He also had a loving wife Catherine and three children (two sons and a daughter). 1957 was a great year for Gambino, on October 24, 1957 his boss Anastasia got whacked while he was getting a shave in the barber shop of the Park Sheraton Hotel. With Anastasia gone Gambino assumed leadership of the Mangano Family, exactly his plan since it was Gambino who was behind the Anastasia hit. Listed as a labor consultant to the outside world Gambino was leading his Crime Family into better times.

Gambino was making loads of money by now. In addition to the illegal income Gambino also made loads with his legal businesses. Gambino owned meat markets, bakeries, restaurants, nightclubs, linen supply companies and on and on. Life was great for Gambino. His health wasn't good but with both his blood and crime family doing well and money pooring in he didn't mind. RICO hadn't made it's grand appearance yet and turncoats weren't as common as they would be during the 1990s. The government knew who Gambino was and what he did for a living but to get to him was impossible. Gambino who entered the United States as an illegal alien still hadn't become an American yet and so that's where the government tried to take Gambino down. They tried to get him deported, but failed time after time. In 1971 Gambino's wife Catharine died. His health was detoriating fast after that. His heart problems kept playing up and by 1975 Gambino felt it was time to choose his successor.

And there he made the only mistake during his reign as boss of the Mangano/Gambino Family. He chose Paul Castellano over his Underboss Neil Dellacroce. This decision cut the Gambino Family in two factions and would create a power struggle a decade later. But in the end Carlo Gambino is considered one of the great bosses of La Cosa Nostra. He died on October 15, 1976 of natural causes in his Massapequa, Long Island home.