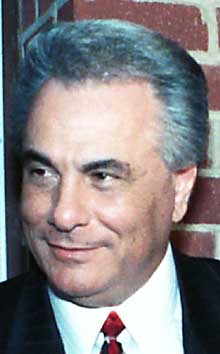 John Gotti was born October 27, 1940 in the Bronx, New York. When Gotti was twelve he and his family move to a rough neighborhood in Brooklyn. In Brooklyn, Gotti took to the streets more and more and he finally dropped out of school in the 8th grade. On the streets Gotti got involved with gangs and committed several small crimes. Gotti would continue his small crimes and eventually started moving up in the underworld. By 1966 Gotti had hooked up with the Gambino Crime Family. Gotti's 'thing' was hijacking trucks, he would make loads of money for the Gambino's, hijacking freight from Kennedy Airport. By now Gotti had moved up in stature inside the Gambino Family. He became close to Gambino Underboss Aneillo Dellacroce and it became clear Gotti was going to get to places but before he started his cilmb he was arrested in 1969 for a hijacking and sentenced to three years in prison.

When he got out Gotti continued his life of crime and decided it was time to take some steps forward. In 1973 Gotti took on the contract of James McBratney, McBratney had allegedly killed a nephew of Carlo Gambino. Allegedly or not, to Gambino it is clear he is guilty and Gotti happily takes the job. After the killing the cops close in on Gotti again, present at the murder were two eyewitnesses. He was arrested. At the trial however he somehow manages to reduce murder to second degree manslaughter and only serves a two year prison sentence. While serving his time inside the prison, outside within the Gambino Family there are some serious changes happening. Carlo Gambino is on his deathbed and appoints his successor: Paul Castellano. Gotti supported his mentor Neil Dellacroce for the top job and was angered to see the job go to Castellano. That anger would never die down and would be one of the ingredients that would fuel Gotti's drive to power.

When Gotti got out of prison he went back to work which included drugdealing. Already unhappy with Castellano Gotti would experience real tragedy in 1980 when his son Frank dies in a car accident. Frank was driving his bike when a Gotti neighbor drove his car down the street, didn't notice him and hit the young Gotti. Frank died from the hit and the neighbor was considered a dead man. After receiving several threats via mail and phone and one time being attacked by Gotti's wife with a baseball bat, Gotti's neighbor decided to move but before he could occupy his new home a van filled with Gotti goons pulled him off the street never to be seen again, at the time of this murder Gotti and his wife were in Florida. Gotti was never charged with the murder. Throughout the '80s Gotti moved up within the Gambino crime Family eventually becoming capo. Gotti still only saw one man as the rightful boss of the Gambino Family, Neil Dellacroce. Under the protection of Dellacroce Gotti kept running his narcotics business with his crew. Castellano knew about it and wanted it to stop, he wanted to demote Gotti or have him whacked but Dellacroce always kept the peace. On the other side Gotti wanted Dellacroce to step up and demand his position as boss but Dellacroce again kept the peace and told Gotti to keep quiet.

In 1985 things came to a boilingpoint, Castelano was indicted in the commission case where wiretap evidence from bugs from within the Castellano mansion was used. And members of Gotti's crew were indicted on narcotics trafficking. All in all you knew, someone had to die. Castellano wanted evidence about the narcotics trafficking so he could have Gotti's crew whacked or disbanded and demoted but Dellacroce kept stalling for time. Gotti on the other hand started saying Castellano might flip under the F.B.I. pressure and thought he should be whacked. Dellacroce kept the two sides from hitting each other, when Dellacroce died in 1985 it became clear the hit on Gotti or Castellano was near. And it was, Gotti acted first. He won the support from the other capos in the Gambino Crime Family and also got support from three of the four other New York Families. Gotti assembled a hitteam and on December 16, 1985 Castellano and his new Underboss Tommy Bilotti were gunned down in front of Sparks Stake House in Manhattan. After this hit Gotti became the new boss of the Gambino Family.

Running his empire from the Ravenite Social Club Gotti right away made clear he wasn't a low key gangster. At his trials he didn't shun the media, he actually loved them. He loved being a gangster. He would show up wearing flashy $2000 dollar suits and that all important smile for the cameras. After winning several trials (one thanks to a bribe by his Underboss Salvatore Gravano) Gotti became a media icon. He got nicknamed the Teflon Don and the Dapper Don. He got on the cover of TIME magazine. He felt invincible. While conducting his business out of his social club Gotti wanted all his employees to come by to pay their respects. When asked if that wouldn't bring attention from the feds he answered "what's weird? Just some Italians getting together, it's our tradition". 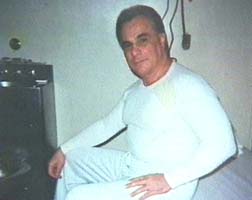 So it went ahead, people who didn't show ended up getting whacked or had some serious explaining to do and the ones who showed had their picture taken by the F.B.I. After several years of observing and listening (they eventually bugged the whole Ravenite building and taped Gotti's conversations) the feds moved on Gotti for the final blow. He was indicted and told they had him on tape. When Gravano heard Gotti badmouth him on one of the tapes it pushed him towards and eventually made him decide to flip. With the evidence from the bugs, the photos and the testinmony of Gravano Gotti's fate was sealed and on April 2, 1992 Gotti was convicted on charges that included five murders and sentenced to life in prison without parole.

In prison Gotti did heavy time, he spent over nine years in maximum 23 hour lockdown. To make his life even worse, several years into his sentence he got cancer. Gotti however kept fighting, the cancer, the system and the feds, Gotti wouldn't go down. On June 10, 2002 however Gotti's fight was over and he died of cancer. A big funeral was held in New York attended by around 130 members of the Gambino Crime Family and his personal family and friends.

Comment by Tom Cast on June 21, 2011 at 5:55pm
I am a huge John Gotti fan and I just recently rented an awesome movie depicting his early years in the New York Mafia.  It's called At the Sinatra Club, I highly recommend it!