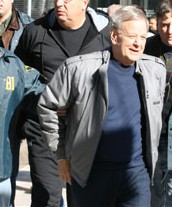 On January 30, 2007 the FBI arrested several mobsters and charged them with racketeering, bribery, extortion, money laundering, loan sharking and bank fraud. Among the arrested were mobsters of the Gambino and Lucchese Crime Families, as well as two mafiosi from Sicily. The Feds’ biggest catch is Gambino capo George DeCicco, 77, pictured above. George DeCicco is the older brother of murdered Gambino underboss Frank DeCicco. Frank DeCicco was a capo under Paul Castellano when he was approached by Salvatore “Sammy the Bull” Gravano (picture on the right, with John Gotti) to help to set up the murder of their powerful boss. Gravano got the request to talk to DeCicco from John Gotti, who was assembling a power base to make a move for the throne. DeCicco joined Gotti and his men and gave them their most useful tip. He told them he and two other capos were having a meeting with Castellano on December 16th at Sparks Steak House. Gotti put his hit team in place and together with Gravano waited in a car nearby, Frank DeCicco sat inside Sparks with capo James Failla. When Castellano and underboss Tommy Bilotti arrived they were shot dead. John Gotti became boss of the Gambino Family and for his cooperation Frank DeCicco was awarded the position of underboss.

On April 13, 1986 Frank DeCicco came to his end. He and Gotti were to visit Failla’s social club that day to see their troops. Gotti canceled his appearance, so DeCicco went alone. DeCicco arrived without problems but went back to his car together with Frank Bellino to get something. When they got to the car, a bomb was detonated, killing DeCicco and wounding Bellino. The whole plot was uncovered later. Genovese boss Vincent Gigante was angry with Gotti for murdering his ally Castellano. He wanted revenge, and together with the Lucchese Family set in motion the plan that was supposed to wipe out both Gotti and DeCicco. James Failla had tipped Gigante Gotti and DeCicco would make an appearance at his club. In a ackward way you could say Failla had killed DeCicco with his own ammo.

George DeCicco was one of the last of John Gotti’s inner circle who had never been busted. Things are looking bleak now though. A Gambino associate has flipped on DeCicco and his crew and taped his conversations with other mobsters, including DeCicco. In one conversation DeCicco is recorded saying: “I’ll burn your eyes, did you ever screw me? Do you want me to burn your eyes out?” to the associate because he hadn’t repaid his loansharking debt to the capo.

The Gambino associate decided to cooperate with the government when he made the mistake of making a promise he couldn’t keep. Gambino soldier Joseph Orlando had a girlfriend who didn’t have legal residence status. The associate told Orlando he had connections to corrupt immigration and other government officials. Orlando gave the associate $9,000 to take care of it. The associate however had no such contacts. When he failed to deliver Orlando went nuts and threatened to kill him. The associate took the threat serious and went straight to the FBI. The FBI sent in an undercover agent posing as a corrupt immigration official. All meetings Orlando and other mobsters had with this agent were recorded by the feds.

The corrupt contacts didn’t just interest the Gambino Family. A Lucchese associate also saw opportunities. Together with Gambino mobsters he wanted to smuggle gold bars worth millions of dollars from the Philippines into the US.

The Sicilian Mafia was another interested party. They paid $70,000 for the release of Sicilian mobster Francesco Nania. Nania was convicted in Italy for mafia-related aggravated attempted extortion, and Italian law enforcement authorities are seeking his extradition to Italy. If he is convicted, he faces a maximum sentence of 15 years in prison. George DeCicco and Joseph Orlando face a maximum sentence of 20 years in prison.

Update: In October of 2014, George DeCicco died of natural causes. He was 85.