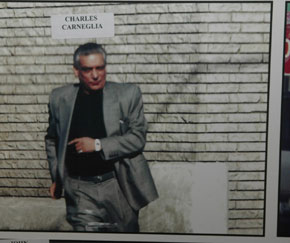 When Charles Carneglia was arrested on the morning of February 7, 2008, he looked (see photo on the right) like more like Charles Manson than a slick member of New York’s Gambino Crime Family. But though looks can be deceiving, in Carneglia’s case the “Manson look” was pretty appropriate.

As a Gambino mobster he had committed countless crimes, including several murders. Carneglia started out as an associate of John Gotti Sr. Together with his brother John, Carneglia became a part of the crew led by Gambino captain Carmine Fatico. And when Gotti rose up through the ranks, so did the Carneglia brothers. Whenever Gotti needed a job done, Charles Carneglia had no problem offering his help.

Like when Gotti’s daughter Victoria had been beaten up by her boyfriend, Gambino mobster Carmine Agnello. At least that is what turncoat mobster Peter Zucarro claimed in court. He testified that in 1979 he joined Charles and John Carneglia when they went hunting for Agnello. "We were instructed to go slaughter Carmine. Find him and slaughter him. Don't kill him," Zucarro said. When they found him, John Carneglia shot him in the buttocks. After that, Zucarro testified, "we all ran up…and beat him down with ax handles."

But Carneglia’s violent capabilities were also a cause of problems for the Gotti crew. In February of 1975, Carneglia stepped into an Ozone Park diner for a short meet with Zucarro. When he leaned across the table to talk to him, “his suit jacket split apart and there were two pistols in his back," Zucarro said. He immediately told Carneglia to hide the guns because they were showing.

Court Officer Albert Gelb was also at the diner at that time and had noticed the armed man. Gelb was the most decorated court officer in the city at the time, according to the New York Times. He quickly decided to approach Carneglia about the guns. Zucarro testified that he heard shouts and saw him struggling with the court officer. The mafia associate stepped in to help his fellow mobster and punched Gelb to the ground. He expected Carneglia to flee the scene, but instead, he was furious and refused to leave the diner. He shouted that he wanted the court officer arrested right on the spot. Needless to say, it was Carneglia who left in handcuffs that evening.

The argument did not end that night. Carneglia faced a charge of weapons possession and Gelb was the main witness against him. Zucarro later testified that Carneglia told him he was trying to straighten things out with the court officer so he would decide not to testify against him. Four days before he was scheduled to testify, Gelb was found shot to death in his car. Though all information and testimony pointed towards Carneglia being the killer, he was never convicted of this murder.

In the years that followed, Carneglia became known as a vicious mob killer. A killer who would shoot first and ask questions later. On November 6, 1977 Carneglia stabbed to death mob associate Michael Cotillo outside the Blue Fountain Diner in Howard Beach. This murder gave Carneglia and the Gotti faction a big headache. Cotillo was the nephew of a Gambino mobster who already was at odds with the Gottis. According to turncoat Anthony Ruggiano there were several sitdowns within the Gambino Family to settle the beef. "They were looking to kill Charlie," Ruggiano said. "I said whatever you do, do it right because Charlie's (Charles Carneglia) no joke." Eventually the beef was squashed and Carneglia got away with murder, again.

By the 1980s the Gotti crew had achieved a fierce reputation on the streets of New York. Charles Carneglia operated with impunity. In the summer of 1983 18-year-old mob associate Salvatore “Worm” Puma was stabbed to death in front of a crowd of onlookers returning from a feast at St.Helen's Church in Howard Beach. Carneglia had confronted Puma because he was suspected of stealing Gambino money earmarked for the commissary accounts of two crime family associates who were in prison for armed robbery.

Vincent Rossetti, a Bonanno Crime Family associate turned government witness, testified that he "could see Sal and Mr. Carneglia ... Sal was walking across the intersection holding his chest. He collapsed on the floor. His hand fell away from his chest and he had a blood patch on his shirt." Back in 1983, no witnesses came forward and the murder went unsolved for over two decades. 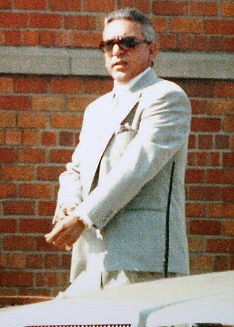 Meanwhile, Carneglia kept doing what he loved: being a gangster. In 1990 he got the order from John Gotti to murder Gambino soldier Louis DiBono. With this murder Carneglia would “make his bones”, which meant that he became a made member of the Gambino Crime Family.

The following years he continued his criminal activities. He was involved in extortion and even robberies. During an armored truck heist at Kennedy Airport in 1990 he claimed another victim when he shot armored car guard Jose Delgado Rivera. The murders, even the murders of those that did not belong to the criminal underworld, never seemed to bothered him.

During his trial that lasted from late January to mid March of 2009, Carneglia never flinched when murders and gruesome acts were discussed. He didn’t even flinch when the Judge Weinstein found him guilty of four murders, extortion, and robbery. When given the opportunity to say some last words, Carneglia did not express regret for what he had done. Instead, he told the court he had not received a fair trial. He complained that “liar after liar testified against me and they all had cooperation agreements.” Thanks to those cooperation agreements former criminals like Vincent Rossetti and Peter Zucarro will end up serving very little jail time, whereas Carneglia will serve the rest of his life behind bars.

Good story !.Carneglia is a mob legend up there with Greg Scarpa.I'm surprised he wasn't given membership years before for all the "work" he'd put in.One of the last of the true gangsters,now reduced to a half-army of rats and wannabes.If memory serves me right he was also a back-up shooter in the Castellano hit.