Gangsters Inc. at the movies: 22 Bullets with Jean Reno as a Marseille mob boss 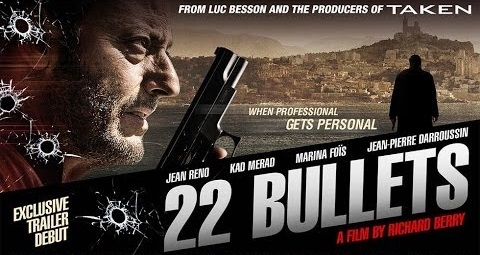 In a world where most gangster movies based on a true story tend to deviate and take a left turn into a fictional alley a film like 22 Bullets is a breath of fresh air. Known under its original French title as L’immortel, 22 Bullets tells the fictional-yet-true story of Marseille mob boss Charly Matteï, played by Jean Reno, who has retired from a life of crime so he can be with his family.

Of course, retirement is never that easy.

Tony Zacchia, his former business partner and friend, has something else in mind for Charly and he is shot by hitmen and left for dead with 22 bullets lodged in his body. Despite his serious injuries, however, he survives. Not just that, he’s alive with a lust for deadly vengeance.

Though it is fictional, the story of 22 Bullets shows a close likeness to the true story of French mob boss Jacky Imbert, who himself was shot 22 times and left for dead. You can read a profile on Imbert here at Gangsters Inc.

But instead of trying to stay close to the true story so it can use – or abuse – the tagline, 22 Bullets simply used these facts to tell a strong fictional tale of gangsters and their two lives: One based on violence and crime, the other based on family and love.

With great actors like Jean Reno and Kad Merad it succeeds in not only getting across this message, but punching it through the silver screen and into the faces of viewers. This crime flick is a superb tale steeped in realism that all moviegoers will love.