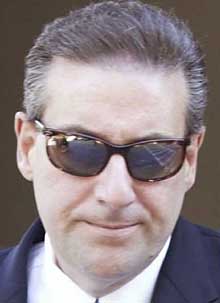 Andrew Gigante was born September 30, 1956 in New York. Andrew's father is Genovese crime family boss Vincent "Chin" Gigante. When you go by testimony by Salvatore Gravano it seemed very unlikely that Andrew would follow in his father's footsteps and join the life. Gravano attended a meeting where Gambino boss John Gotti told Vincent Gigante he had just made his son, John Junior, into the Gambino Family. In reply Gigante said: "Jeez, I'm sorry to hear that." But in this day and age where omerta is just another word without meaning a son is the only person you can trust and so it wasn't long before Andrew was caught up with mob business. He became the messenger between his dad and the other Genovese mobsters. On the legit side of things he was an executive with Bay Container and Portwide Cargo Securing in Newark. A job that earned him $350.000 per year.

On January 23, 2002 Andrew along with his father and several other Genovese mobsters were arrested and charged with running extortion rackets on the New York, New Jersey and Miami waterfronts. In April of 2003 Andrew pleaded guilty to extorting a large container repair and storage company on the New Jersey, New York and South Florida piers and to using mob muscle to seize control of the International Longshoremen's Association in New Jersey, New York and Miami. Andrew agreed to forfeit $2,000,000 of his ill-gotten gains from the extortion to the government, and, as part of the settlement of a civil racketeering case that accompanied the criminal prosecution, agreed to be barred for life from any activity on the New York, New Jersey and South Florida piers. Andrew denied using violence to impose his will on the union but prosecutors said: "There was an implicit threat of harm, that if moneys were not paid to the Genovese family, and that included associate Andrew Gigante, it would lead to violence". On July 25, 2003 Andrew was sentenced to two years in prison. In the summer of 2005 he was released.