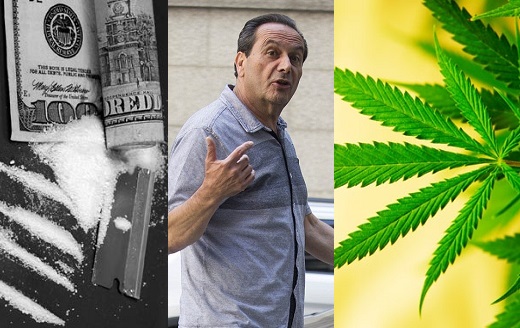 Talk about not giving a fuck. Genovese crime family mobster Bradford Wedra (photo above) was in court on Monday where prosecutors asked the judge to revoke his bail after the 61-year-old wiseguy failed six drug tests – twice for cocaine and six times for marijuana.

The failed drug tests are in violation with his bail terms, prosecutors argued. They made a pretty good case and were helped by Wedra who told the court he has “no intention of stopping” his drug use, the New York Daily News reported.

Disregarding the fact that it might not be smart to say such things in court, what will Wedra’s colleagues in the Mafia think?

Wedra was scooped up several months ago in a nationwide mob bust netting 46 members and associates of New York’s Genovese, Gambino, Lucchese, and Bonanno families and Philadelphia’s Bruno family. He is charged with racketeering conspiracy charges related to his suspected role in smuggling $3 million worth’ of untaxed cigarettes. Wedra pleaded not guilty. He already served a 25-year-sentence for a 1980 murder.

As a member of Genovese mob family capo Pasquale Parrello’s crew Wedra was allegedly in the know about a lot of crimes, including an alleged murder conspiracy. Though Parrello and his crew probably already knew about Wedra’s drug use, they might’ve thought it was recreational. Failing drug tests you know are coming due to the fact you are out on bail in a major racketeering case involving five La Cosa Nostra families is anything but recreational. It’s the behavior of an addict, a junkie.

No it isn’t, Wedra’s lawyer claimed. “Mr. Wedra has some developmental disabilities. He has some learning deficits. This has plagued him his entire life. It has been documented by psychiatrists that he has borderline mental retardation. The fact of the matter is, he cannot read and is very limited in his ability to write,” the lawyer explained, according to the New York Daily News.

It’s an explanation the Genovese mob can get behind! Vincent “Chin” Gigante, one of its longtime bosses, evaded prison for decades by acting like a crazy person. He took showers in his robe while being sheltered by an umbrella and talked to parking meters while walking the streets of New York, but behind closed doors he ran the most powerful Mafia family in the nation.

For some reason, the crazy act works.

The retard act apparently did as well. The judge accepted Wedra’s lawyer’s explanation and gave the drug-abusing mobster another chance, telling him “This leash is going to be very, very short. We are not going to do this charade all over again, okay.”

Wedra was ordered to attend a drug-treatment program, the New York Post reported. The New York tabloid offers a different account of Wedra’s reaction in court than the New York Daily News. They quoted Wedra as saying, “Your Honor’s 100 percent right. Everything you said I did. But I haven’t smoked in — six days is today. I am going to stop. And I give you my word that I will go to any services they send me to, any treatment.”

Whatever. Party up! Freedoooooom!! Woohooo!!