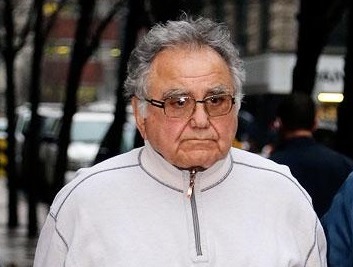 The garbage industry has always been a big moneymaker for the Mafia. Though authorities have worked hard at ridding the industry of its criminal elements, the mob is still at it. Case in point: Carmine Franco, a 78-year-old Genovese Family associate, who, for over thirty years, has bled the waste hauling industry for all he could.

Carmine Franco, nicknamed “Papa Smurf,” knew the jig was up. As he pleaded guilty to racketeering conspiracy, conspiracy to commit mail and wire fraud and conspiracy to transport stolen goods, he knew he would die in prison.

At 78 years old it doesn’t matter how many years he will get, be it the possible 45 years behind bars or just two to three years, his chances of dying in freedom are slim. Franco (right) also agreed to pay $2.5 million of his ill-gotten proceeds to the government as part of his plea. Evidently, there still is money in garbage. Lots of it.

Together with other members and associates of New York’s Genovese, Gambino, and Lucchese crime families, Franco was part of a group that exercised illegal control over waste haulers in the counties of Bergen and Passaic in New Jersey and Westchester, Rockland and Nassau in New York.

The group issued so-called “property rights” to mob-linked companies and divided various “stops” where garbage could be picked up by the company which had been given the rights. If other companies tried to step in, offering lower prices or better service, the mob would tell members of the company to beat it or face the violent consequences.

The same was true for companies that were seen as a golden goose from which the mobsters could extract plenty of golden eggs. Either they paid with money, or they paid in blood. The Mafia calls it “protection” money, but that’s just their way of marketing the century-old racket known by most as extortion.

In January of this year, the FBI indicted 32 members linked to this “Waste Disposal Enterprise” and listed Franco as their top target. He was also a familiar target. With two prior convictions related to the garbage hauling industry. One in the 1980s and the last one in 1994, when he defrauded the state of New Jersey and Bergen County out of millions of dollars by shipping garbage to out-of-state landfills.

This last bust resulted in him being banned from the waste hauling business in New Jersey altogether in 1998. He was also banned in many New York jurisdictions, including New York City and Westchester County.

But it takes more than a ban to keep a wily old wiseguy from earning. Franco simply started running his business through puppet men.

As a way of staying ahead of the competition, in January of 2010, Franco ordered Stephen Moscatello to steal waste containers from garbage hauling companies in New York. These containers were then repainted so that colors matched those of Franco’s company. He then used them at locations in New Jersey.

Franco also ordered Moscatello to steal garbage from locations serviced by rival companies. From 2009 to 2010, they would steal cardboard in New York and sell it to an export broker in New Jersey.

Name any way a person could scheme to make a buck from garbage and Franco has done it.

Unfortunately for Franco, this time, he had picked the wrong victim.

One of the company owners Franco was extorting weekly payments from was working as an undercover informant for the FBI. With each payment there was more proof of criminal activity linked to Franco.

Realizing the prosecution had an airtight case against him, Franco pleaded guilty. His sentencing is scheduled for March 19, 2014. At age 78, that date is a long time away.