Gerry “The Hint” Coxson and the men England could not tame 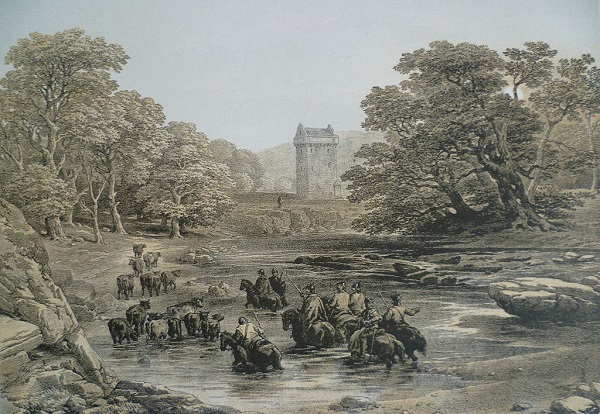 Just as the Sicilian Mafia’s roots are from a rural crime tradition that sprang up from the citrus groves and cattle rustling on the Mediterranean island, so a British mafia emerged on the Border between England and Scotland some two centuries earlier.

The Anglo-Scottish Mafia – better known to historians as the Border Reivers – gave the words “blackmail” (protection money, as opposed to “green” mail, paid to the landowner), “bereaved” and “Scot-free” to the language.

The Reiver’s criminal empire of cattle theft, murder and blood feud was finally ended in the years after 1603 by hangings, drownings, beheading and banishment by the State in a brutal clamp-down known as “The Pacification.” But the names of the reivers live on in their ancestors – men such as former President Richard Nixon and the first man on the moon, Neil Armstrong.

Rooken Edge is situated deep in the heart of the Northumberland National Park, a wild and barren place of wood plantations on sparse moorland, of dark star-filled skies, silence and solitude just west of the A68 road not far from the isolated Redesdale Arms pub, better known as the “First and Last.”

Not, then, the kind of place that you would normally associate with an organized crime figure who was involved in gangland activity for over 30 years. But Gerard Coxson, or Gerry “The Hint,” as he was known to his reiving associates, hailed from the area and was just one the Redesdale riders that engaged in cattle theft, extortion, burglary, kidnapping, ransom and murder in the couple of hundred years leading up to the early 1600s on the Anglo-Scottish border.

The Hint’s exploits are all but forgotten now, and the reiver heritage that has lingered longer in the imagination and popular culture is one of Scottish riders from Liddesdale such as the Armstrongs and Elliots romantically riding over the Border to steal a few cattle and drive them back over the line to safety like some poor Robin Hood or Braveheart-type characters.

The reality, however, is much less straightforward and infinitely more sinister. The reivers weren’t bothered about who they stole from, English or Scottish, and often rode in gangs made up of family members from both sides of the line in a number of criminal syndicates that are best summed up by drawing parallels to the modern Mafias such as the Sicilian Cosa Nostra, the Neapolitan Camorra, the Calabrian ‘Ndrangheta or even the Five Families in New York.

When The Hint was accused and charged with the “felonious receipt of Robert Elliot of Copshaw, a great thief,” who was suspected of stealing a grey mare from William Dowges of Dowgesburn in 1628, the Scotsman wasn’t just popping in for a mug of beer and a chat on his way home. Gerry was also under suspicion of stealing eight horses from the gentleman John Wrinkles of Harnham (possibly Farnham) himself the following year, so he was heavily implicated in an international horse-stealing ring.

These days he would be classed as a career criminal and his charge sheet was long, beginning in at least 1596 when he stole 21 cattle and a horse during a violent late-night burglary at Blacklaw in Northumberland. He was also stealing in Scotland that year and lifted nine pigs from Lance “The Goodman of Gateshaw” Kerr. Gerry appeared in the records again in 1602 when he stole two horses with Gregory Wanless from Ponteland. The Hint would probably be classed as a “soldier” in today’s Mafia, with the more powerful and violent Hall Family of nearby Otterburn being the most prominent in Redesdale’s raiding fraternity.

The Border Reivers not only corrupted officials and relied on friends in positions of power within the local justice system, known as “March Law” – a set of laws distinct and unique to those of the rest of Britain at the time – to avoid punishment and often break jail, but they were often also related to those officials by blood and marriage ties.

Even following the ascension of the Scottish King James to the English throne in 1603 and the subsequent abolition of the Border, renamed the “Middle Shires,” the crime families persisted in stealing cattle despite huge numbers of hangings, banishments and outlaw proclamations – hence The Hint’s long-term offending.

Many reiving characters are better known and celebrated, but few, save the likes of Gerry and John Charlton of the Bower from nearby Tynedale, persistently found themselves locked up in places such as the High Tower at Newcastle up to two decades after the Borderers were supposedly “pacified.” They were the men they could not tame.

Northumbrian sports journalist Jon Tait (Twitter - @jonmarktait) explores the rise and subsequent fall of the rural Border gangs in his new book “Dick the Devil’s Bairns – Breaking the Border Mafia,” a heavily researched and readable story of historic true crime in the area. The 244-page book (ISBN: 978-3-7439-9566-6) is priced at £12 (e-book £2.48) and is published by Tredition GmbH. It is available now from many online retailers like Amazon, Tredition, Barnes and Noble, Waterstones.