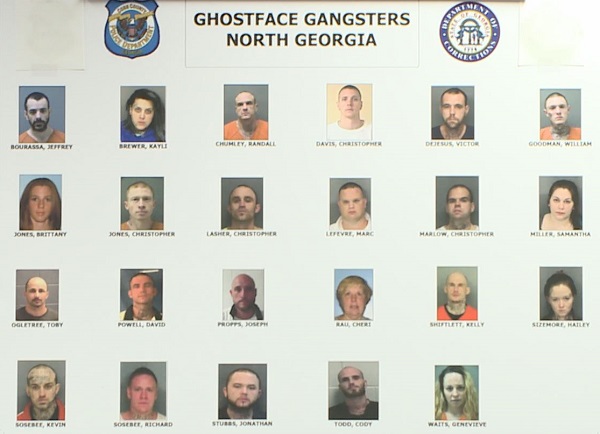 Twenty-three members and associates of the Ghostface Gangsters prison gang have been hit with a 21-count racketeering indictment charging them with crimes ranging from wire fraud to murder. The gang originated in the Cobb County, Georgia jail in 2000, and has since spread through Georgia jails, prisons, and beyond.

Members within the prisons used contraband cell phones to continue their drug sales both within and outside the prison and used the phones to communicate regularly with other gang members one-on-one and even conducted video conferences with multiple members about decisions to be made by the gang.

Other members and associates are charged in a drug conspiracy, and with separate counts of Violent Crimes in Aid of Racketeering, including carjacking, attempted murder, kidnapping, assault with serious bodily injury and maiming.

Since the early 2000’s, Ghostface Gangsters and their associates have trafficked methamphetamine, marijuana and illegal pills, both inside and outside prisons throughout Georgia. Some of the defendants in this case have committed multiple violent acts to include:

On July 5, 2016, defendant Victor Manuel Dejesus allegedly violently carjacked a citizen using a firearm and threatened to kill her.  He took the car, then picked up defendant Christopher Marlow, and together they fled from a Cobb County Deputy Sheriff. Dejesus shot at the deputy from inside the car and later threw the gun out the window. The gun was later turned over to police after a citizen found it lying on the side of the road.

On December 2, 2016, defendant Cody Ryan Todd, upon receiving an order from defendant David Gene Powell, allegedly joined other GFG members to kidnap one of their own members for violating gang rules. Todd and the other members of the GFG beat the victim badly, including trying to pull out his teeth with pliers.  They videotaped the incident, which showed the victim lying down and pleading for help because he could not breathe.

In December of 2016, defendants Christopher Jarman Davis and Jonathan Stubbs, under the orders of defendant Jeffrey Alan Bourassa, allegedly kidnapped another GFG member, held him at gunpoint and cut off his tattoo with a knife.

On October 29, 2016, defendant Richard B. Sosebee shot a man in the eye during a drug deal, causing him to lose his eye.

On December 11, 2017, defendant Kevin Scott Sosebee was a passenger in a car pulled over in a traffic stop.  The Cobb County Police officer who pulled the car over was alone.  Before the officer could exit his car, Sosebee allegedly shot at him several times and then fled from the officer.

“An attack on our law enforcement officers is an attack on all of us and can never be tolerated,” said Attorney General Jeff Sessions. “Law enforcement officers are the thin blue line standing between law abiding people and the violent gangs and criminals who peddle poison to our young people, terrorize our communities, and attempt to impose a false sovereignty over our neighborhoods.”

“The Ghostface Gangsters gang is very violent and their members will not hesitate to shoot at anyone,” said U.S. Attorney Byung J. “BJay” Pak.  “Members have allegedly committed drug trafficking crimes inside and outside of prisons to make money, while committing violent crimes against each other, innocent citizens, and police officers. We are partnering with local and state law enforcement agencies, including the Georgia Department of Corrections, to stop this criminal enterprise.  If convicted, the defendants will be removed to federal facilities all across the United States.”

“As a result of this operation, ATF has disrupted a dangerous and pervasive threat to the local community,” said ATF Acting Special Agent in Charge John Schmidt. “The Ghostface Gangsters gang flourished through recruitment, intimidation, and perpetration of heinous crimes, and it is critical that law enforcement agencies take aggressive actions against these criminals. This investigation is an example of ATF remaining on the frontline of preventing violent crime through excellent cooperation with our law enforcement partners.”

The following defendants are also named in the drug conspiracy:

Additional defendants and their charges are as follows: