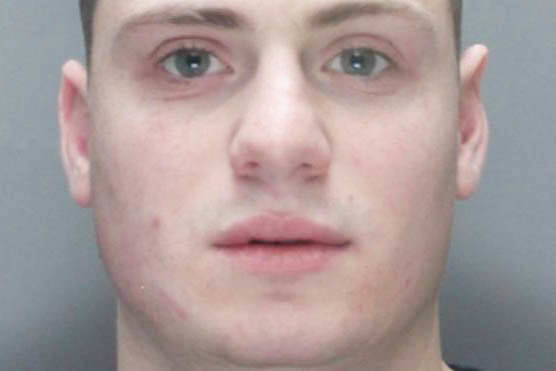 Dark humor. What else can you do when you’re facing over three decades behind bars? That’s what fugitive Liverpool gangster Shaun Walmsley must’ve thought when cops slapped handcuffs on him after he spent 18 months on the run after breaking out of prison with the help of some of his machine gun-wielding friends.

“Good jobs, boys” 29-year-old Walmsley told the arresting officers after they tasered him and dragged him out of the car he was in. Necessary violence for a very violent man. A man who was kicking and screaming the entire time as agents tried to subdue him, as a video posted by British tabloid The Daily Star shows.

Back in June of 2015, Walmsley and three other men were sentenced to life in prison for the murder of 33-year-old Anthony Duffy, a rival drug dealer who was stabbed 28 times in May of 2014.

Facing such serious time spooked Walmsley and he decided to plot his escape. He lost weight and told prison authorities he had bowel issues. He was allowed to go to the hospital under an escort of armed guards on February 8 of last year and was told to return on February 21 to undergo a minor endoscopy procedure.

Upon exiting the hospital, two men - one armed with an Uzi submachine gun, the other with a knife and a gas canister - threatened the guards and ensured Walmsley’s successful escape. It took police 18 months before they located the fugitive killer in Leeds and arrested him.

On Tuesday, October 2, he pleaded guilty to a single count of escape from custody. As a result of his prison break, the Judge tacked on another eight years to his sentence.