Gotti Junior talks about his father, the Mafia & John Travolta 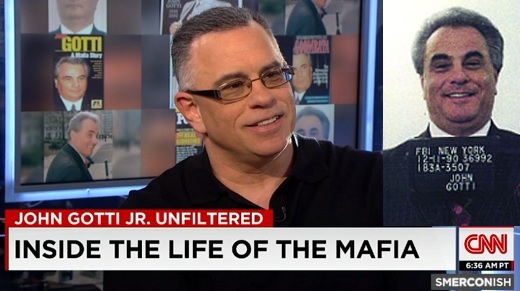 “The first time my dad ever said he loved me was in Marion, Illinois, and we had a two inch thick glass between us,” says John Gotti Junior. The retired mob boss is pulling no punches in telling us about “the life.” He is currently on tour promoting his book Shadow of My Father which details his rise in the Gambino crime family under the guidance of his father and how he eventually quit the Mafia.

Sitting down with CNN’s Michael Smerconish, John Gotti Jr. opens up about his upbringing, his relationship with his father, and Hollywood’s portrayal of the Mafia. “I never watched The Sopranos,” he tells Smerconish right off the bat in an interview aired yesterday. For a guy who grew up in the Mafia and lived, ate, and breathed “the life” for several decades there apparently wasn’t much to enjoy about HBO’s classic mob series.

That is not to say he didn’t watch mob movies. “I loved The Godfather,” he adds. Asked which movie offers viewers the most realistic glimpse of the mob, Gotti Jr. doesn’t offer one title, rather that “the life” as he knew it was somewhere in between The Godfather and Goodfellas. “It depends on your perspective,” he says. “I spent some time in Florida, in Boston. Everything is different. Everybody ran their household a different way.”

Just like John Gotti Senior (right) ran his own household in a certain way. Junior tells Smerconish how he didn’t have much quality one-on-one time with his dad. “That never existed with my father,” he says. “Go to a Jets game? Yes. He was a big Jets fan. We’d go to a Yankees game, he was a big Yankees fan. But it was always an event, because there were six, seven guys coming with us. Did me and my father do these things alone? I can’t recall ever.”

After John Gotti Sr. was found guilty of murder and racketeering charges, he was sent to the maximum security prison in Marion, Illinois, to serve his sentence. Perhaps for the first time in his life the Dapper Don took a moment to reflect on his life and actions. For his son those times were the most hectic ever, but it did offer him a bittersweet moment.

“The first time my dad ever said he loved me was in Marion, Illinois, and we had a two inch thick glass between us. And his way of saying it to me was: ‘You seem a little tired.’ The life was getting to me,” Gotti Jr. explains. “I was fighting his appeal and meeting with lawyers, my own children, businesses, everything was wearing me down. He looked at me and he hit the glass and he said: ‘You know I love ya, right pal?’ That was his way of saying it. ‘Yeah, I know, dad, I know.’ He says: ‘Alright, good.’”

He understands people will question whether or not Gotti Sr. was a good father, but Junior thinks his father simply saw that he wanted to be in “the life” and accepted his son’s wishes. “This is what [my son] wants. I believe in the life wholeheartedly. I think it’s no different than H.W. Bush bringing his son into politics. He was a card-carrying Republican, believed in the Republican Party, and believed in the political world. That he could make a change. Well my dad believed in the card-carrying hoodlum. He believed in the streets. In the policy of the streets. He believed this was the way it should be: We’re right, they’re wrong. So with all that being said: Why not?” 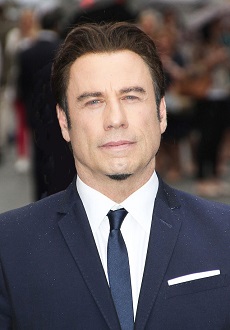 It’s that belief in and adherence to the mob’s code of honor that made John Gotti Sr. into the most famous gangster since Al Capone. And where there’s fame, there’s Hollywood. Gotti Junior’s book Shadow of My Father will be turned into a motion picture with actor John Travolta (right) starring as John Gotti Sr.

He wants to get his depiction of Gotti perfect and is absorbing all things Gotti like a sponge. Gotti: “When he came to the house to meet my mother he insisted that I bring him upstairs to my mother’s bedroom.” Once upstairs, Travolta asks: “John, if you don’t mind my asking, what side of the bed did he sleep on? Do you mind if I lay down on his side of the bed?” To which Gotti replied: “I’m not gonna lay with you, but go ahead.”

Looking at Gotti Junior one can see life is good now. He smiles a lot, cracks jokes, he has been through the wringer and came out in one piece. After spending years in prison and going through four mistrials, Lady Justice has decided to give him another chance at a legitimate life and the former Gambino crime boss has taken that chance with both hands and a smile.

Still, his past is always there. When Junior was stabbed in a Long Island parking lot rumors swirled about mob payback. Some things can’t be forgotten.

Something John Travolta found out as well. As he was walking through Gotti Sr’s bedroom, Junior showed the Dapper Don’s closet. Everything is still there. All his suits. His widow has left everything just the way it was. She did the same with the room of her son Frank, who died when he was accidentally struck by his neighbor’s car in 1980. Junior’s mom won’t ever change it. “She’s old school,” he says. “A tough old gal.”

Some things just can’t be forgotten.

You can watch the whole interview – including parts 1 and 2 – at the website of journalist Peter Lance, who wrote the foreword for John Gotti’s book Shadow of My Father. Peter Lance has written several books of his own including Deal with the Devil: The FBI's Secret Thirty-Year Relationship with a Mafia Killer.