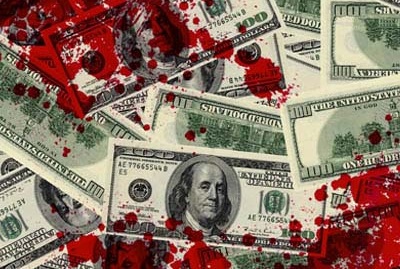 Not all men are created equal. And there is a different set of rules for a different class of people. Case in point: Greedy bankers versus blue-collar mobsters.

Colombo associate Pat Truglia stood trial for money laundering last month. Prosecutors alleged Truglia, together with Colombo consigliere Thomas Farese, laundered $40,000 in illicit cash. It seemed like another cut-and-dry mob case where one could expect a guilty verdict with almost one hundred percent certainty. The mob’s reputation is such that prosecutors do not need much to score a win for the government.

But in a weird twist the jury acquitted mafia leader Farese and found lowly associate Truglia guilty. The poor wannabe mobster now faces 21 to 27 months in prison. Wait, did I just call him poor? Of course, someone who is handling $40,000 in cash isn’t quite without financial means. Someone like that certainly isn’t innocent either. So why label him as “poor”? Well, cause if he had stayed in school he might have gotten a get-out-of-jail-free card and a chance to keep untold millions of illicit cash. Don’t believe me?

British banking giant HSBC will pay a record $1.8 billion fine for laundering the money of a diverse group of gangsters and terrorists from Mexico, Russia, Iran, Libya, Sudan, Burma, and Cuba. According to court documents, HSBC Bank USA failed to maintain an effective anti-money laundering program and failed to conduct appropriate due diligence on its foreign correspondent account holders.

HSBC apparently took into account the possible fine, The Independent reports, “it was only a month ago that the bank doubled the amount it set aside for the fine to $1.5bn with an acknowledgement that it really didn't know how much it would be on the hook for.”

The article continues: “What sounds like a big number is less than 10 per cent of last year's profit or smaller than the gain booked on the sale of HSBC's stake in Chinese insurer Ping An earlier this week. The balance sheet of the "world's local bank" can cope with it.”

No sweat for the greedy bankers. They have enough money… in the bank. So, they paid their record fine. But surely the United States government has got something more up its sleeve for these sleazy men (and women?) who provided valuable assistance to murderous regimes and vicious drug cartels. Terrorists and groups of death squads didn’t have to worry about their monthly cash payment while beheading their enemies and any innocent bystander that was in the wrong place at the wrong time. The HSBC gave these cold-blooded murderers peace of mind. They got fined, now let’s get to the real punishment!

Only, it isn’t there. There is no other punishment beside the record fine which HSBC has paid without blinking an eye. No bankers are going to prison. The leadership of the bank will not be replaced by a group appointed by the FBI like is frequently done to corrupt unions. Nope. The fine has been paid and business may continue. And the billions keep rolling in.

According to court documents, from 2006 to 2010, HSBC Bank USA failed to implement an anti-money laundering program capable of adequately monitoring suspicious transactions and activities from HSBC Group Affilliates, particularly HSBC Mexico, one of HSBC Bank USA’s largest Mexican customers. This included a failure to monitor billions of dollars in purchases of physical U.S. dollars, or “banknotes,” from these affiliates. Despite evidence of serious money laundering risks associated with doing business in Mexico HSBC Bank USA rated Mexico as “standard” risk, its lowest risk category. As a result, HSBC Bank USA failed to monitor over $670 billion in wire transfers and over $9.4 billion in purchases of physical U.S. dollars from HSBC Mexico during this period, when HSBC Mexico’s own lax controls caused it to be the preferred financial institution for drug cartels and money launderers.

A significant portion of the laundered drug trafficking proceeds were involved in the Black Market Peso Exchange (BMPE), a complex money laundering system that is designed to move the proceeds from the sale of illegal drugs in the United States to drug cartels outside of the United States, often in Colombia.

Do the numbers make you dizzy? I’m sure Colombo family mobster Pat Truglia will try to twist his head off after reading these figures. Poor Truglia. Doing at least 21 months in an American prison for laundering a measly $40,000 in illicit cash. 21 months surrounded by murderers, rapists, gangbangers, cartel hitmen, and maybe, just maybe, one very unlucky banker.

In 1939 biologist Jean Rostand wrote: “Kill one man, and you are a murderer. Kill millions of men, and you are a conqueror. Kill them all, and you are a god.” In our civilized society, murder has been replaced by money. Depending on your wealth you will be treated as a murderer, conqueror, or god. There is no good or wrong. Only green.

HSBC British bank, drug traffickers are welcome at HSBC. Im interested in Meth and trafficking in Meth. Its on the increase all over the world. Some say it has replaced heroin. There seems to be no data recorded about the damage it does to others. Murders it causes too. So many violent incidents are Meth related or caused by Meth. Its a drug that needs to be documented.