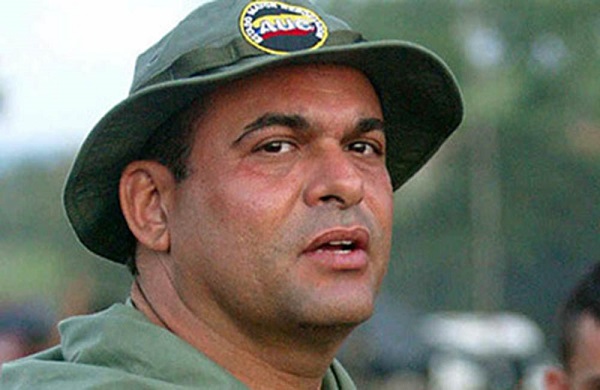 The Colombian government should urgently exhaust all legal avenues to secure the extradition of a former paramilitary commander, Salvatore Mancuso, from the United States, Human Rights Watch said yesterday.

Mancuso (photo above), a former top commander of the United Self-Defense Forces of Colombia, is in the United States after completing a prison sentence here for cocaine trafficking. Colombian authorities seem to have put little effort into seeking his return. According to Human Rights Watch, he should be held accountable for his atrocities, and his testimony would be valuable in uncovering the full truth about the paramilitaries’ crimes and accomplices.

“Salvatore Mancuso’s testimony could help uncover the truth about hundreds of crimes and ensure justice for thousands of victims,” said José Miguel Vivanco, Americas director at Human Rights Watch. “But Colombian authorities have done little to secure his extradition – and what they have done has often been strikingly sloppy.”

In 2015, a US federal court sentenced Mancuso to 15 years in prison for his role in international drug trafficking, pursuant to a plea agreement. In March 2020, he completed his sentence. People close to Mancuso have told the Associated Press that the US Department of Homeland Security has ordered his removal to Italy, where he also has citizenship, though that has not yet happened. Courts in Colombia have convicted Mancuso in over 1,500 cases of murder or enforced disappearance to which he has confessed, often implicating other commanders and politicians. Hundreds of other criminal investigations are pending against him. Italy and Colombia do not have an extradition treaty.

In 2008, then-President Álvaro Uribe abruptly extradited Mancuso and 13 other paramilitary commanders to face drug charges in the US. Uribe is the mentor of current president Iván Duque and the leader of the ruling party, the Democratic Center. The commanders were sent to the US after the Colombian Constitutional Court ruled that the paramilitaries were required to tell the truth about their crimes and accomplices if they wanted to receive reduced sentences under the country’s 2005 Justice and Peace Law. At the time, the Supreme Court was making significant progress in investigating members of Uribe’s coalition in Congress, as well as state and local authorities, for collaborating with the paramilitaries.

From the US, Mancuso continued confessing to crimes in Colombia under the Justice and Peace Law, which grants reduced sentences of up to eight years in prison for paramilitary fighters who fully demobilize, confess their crimes, and turn over their illegally acquired assets. In November 2019, a court in Bogotá concluded that Mancuso had served his time under the Justice and Peace Law in US prisons and granted him probation. But on August 11, an appellate court in Bogotá overturned the November decision and ordered Mancuso’s arrest. The court asked the Justice Ministry to pursue Mancuso’s extradition. The August 11 decision came after an appeal by a victims’ lawyer and the attorney general’s office.

Colombian authorities are still pursuing hundreds of investigations for war crimes against Mancuso, according to prosecutors and court files. If Mancuso confesses to these crimes and cooperates with the judicial system, many of these cases will likely be consolidated with the Justice and Peace convictions. But based on the Constitutional Court’s ruling, Mancuso could lose his Justice and Peace law benefits and be subject to long prison sentences if he commits new offenses, lies about his crimes, or otherwise fails to cooperate with the justice system.

Mancuso will have no incentives to cooperate with the Colombian justice system if he is allowed to go to Italy, Human Rights Watch said.

Colombian authorities have made three attempts to request Mancuso’s extradition. The Justice Ministry, Foreign Ministry, attorney general’s office, and some judges have been involved in formulating the requests.

In June, US prosecutors filed a request before the United States District Court for the Middle District of Georgia on behalf of their Colombian counterparts, urging Mancuso’s extradition to Colombia to serve a 27-year sentence for two 1997 cases of kidnappings and murder, court files reviewed by Human Rights Watch show. But days later, Colombia suddenly withdrew its request. While Colombian authorities did not provide a reason, Human Rights Watch learned that the request was withdrawn because Colombian courts had already consolidated the case with the Justice and Peace convictions and considered that Mancuso’s sentence had been served.

“A cursory review of the relevant Justice and Peace conviction and an online search would have been enough to identify Colombia’s mistake in the extradition request,” Vivanco said.

Between March and May, Colombian authorities prepared two other extradition requests concerning cases of murder, forced displacement, and kidnapping, judicial sources told Human Rights Watch. But US authorities turned down the requests, apparently because they were based on legal charges that do not have a counterpart under US law – a standard requirement for extradition from the US. With hundreds of investigations pending against Mancuso and with Colombian authorities having so much experience in dealing with extradition issues, the three flawed requests are difficult to square with the importance of this case, Human Rights Watch said.

Colombia could also request Mancuso’s extradition for a pending money laundering case for which he was charged in 2014 that, if it led to a conviction, could also be a basis for withdrawing Justice and Peace law benefits. Judicial officials told Human Rights Watch that the government has not pursued this avenue because the money laundering case is supposedly pending before the Special Jurisdiction for Peace, a court system created under a 2016 peace accord with the Revolutionary Armed Forces of Colombia (FARC) guerrillas.

The Special Jurisdiction for Peace is not entitled to request extraditions. In October 2018, a judge in Colombia’s regular court system “suspended all judicial activity” in the money laundering case because some of the accused – though not Mancuso – had requested that the case be reviewed by the Special Jurisdiction, the attorney general’s office said in an August 12 statement.

However, the Special Jurisdiction’s president, Patricia Linares, said in a statement on the same day that there are “no obstacles for Colombia to request the extradition of Mancuso.” As far as Human Rights Watch has been able to determine, there have been no efforts so far to revive the money laundering process to seek an extradition.

Mancuso has also requested Special Jurisdiction review of some of his cases. His request, which Human Rights Watch reviewed, concerns cases in the 1980s and 1990s, and does not include the alleged money laundering, which occurred after his demobilization, in the mid-2000s. In June 2020, a Special Jurisdiction judicial panel rejected Mancuso’s request. As Linares made clear in her August 12 statement, the appeal of the rejection is not an obstacle to requesting his extradition.

President Duque told the media that he wants Mancuso to return to Colombia or else be held to account abroad. “The second he steps on Italian soil, I will personally make a request to the International Criminal Court (ICC) that he be tried for these crimes,” Duque told Semana magazine.

The ICC is a court of last resort that may only take up cases when national authorities do not conduct genuine proceedings. The ICC prosecutor’s longstanding preliminary examination of the situation in Colombia includes assessment of domestic proceedings related to alleged crimes against humanity committed by paramilitary groups.

“Instead of all this posturing about the ICC, President Duque should get serious about ensuring that his own government makes genuine and thorough efforts to secure Mancuso’s extradition,” Vivanco said.