International operation in Italy seizes over 20 tons of cannabis

An international operation led by Italy and closely supported by France, Spain and Europol, resulted in the discovery and seizure of over 20 tons of cannabis resin yesterday. The drugs - with an estimated street value of €200 million - were hidden in the deck of a merchant vessel called Jupiter, flying the flag of the Cook Islands.

The Italian Guardia di Finanza and DCSA, closely supported by the French OCRTIS-DCPJ and CeCLAD-M, Spanish Guardia Civil, and Europol, launched this sharp strike against transnational drug trafficking activities in the Mediterranean Sea. 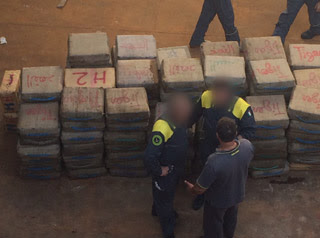 On the evening of 26 September, 2015, the vessel was located by the air and naval forces of the Italian Guardia di Finanza, assisted by a Spanish Guardia Civil aircraft. The Italian intervention teams of the Guardia di Finanza boarded and secured the vessel, escorting it to the Port of Cagliari in Sardinia.

After long and extremely complex search activities the enormous illegal load was found skillfully stashed in a large false bottom under the hold of the vessel with its only access hidden by hundreds of tons of granite being used as legal cargo.

At the time it is still unknown which organized crime group(s) were involved in this shipment.