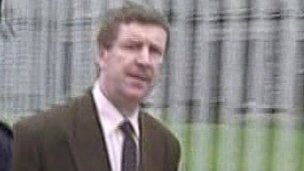 He was called “The Godfather” by the Irish media and every gangster who was worth his guns sought his guidance. Crime boss Eamon Kelly sat firmly on top of the Irish underworld and loved every minute of it. Up until his very last minute, yesterday, when he was shot dead by an assassin.

Eamon Kelly spent his last minutes on earth walking his dog near his home in Killester, on Dublin's Northside. Just after 4pm, a dark-colored 1996 Lexus drove up beside him. In it sat two men, one of whom jumped out of the car and pointed a gun at Kelly and fired several shots into his body.

As his last seconds were ticking away, Kelly lay bleeding in the street. Whatever his last thoughts might have been, he could not have been surprised at this ending. Just two years earlier another gunman had attempted to kill him right outside his home. That time, Kelly had a little bit of that luck of the Irish when the assailant’s weapon jammed and the crime boss managed to escape unharmed. This time, he had no such luck. “The Godfather” was dead at the respectable age of 65.

After firing the shots the gunman got back into the getaway car which sped off away from the crime scene. Gardaí, Irish police, were in hot pursuit of the suspects who abandoned and torched their car a mile from where Kelly had been shot. The two gunmen split up and fled on foot. Gardaí continued their manhunt and managed to catch one of the alleged assailants.

The apprehended suspect is a 32-year-old Real IRA member who has been involved in serious crime for over a decade. He was one of the Real IRA's most senior Dublin operators and is a suspect in a number of shootings.

The murder weapon was not found, but one theory alleges that the gun was handed to a third culprit on a motorcycle who disposed of it. If this member of the Real IRA is indeed the man behind Kelly’s murder there are plenty of possible reasons for the execution. Matter of fact, the failed hit in 2010 was said to be on orders of the Real IRA as well. Why did they, so desperately, want him dead, one might ask? The answer is as simple as the motive behind many gangland murders: Because he refused to give in to their demands.

Eamon Kelly (right) never was one to bow down to another man. Growing up in Summerhill in the north of Dublin, he quickly turned to a life of crime. As a teenager he committed crimes such as shoplifting and other minor thefts. During the 1960s he is said to have joined the IRA, though accounts on that differ. What is clear, however, is that he became a notorious and successful armed robber during the 1970s and 1980s, following the example of Martin “The General” Cahill.

Armed robbers were known to be tough guys who had no problem with getting their hands dirty. Kelly proved as much when he stabbed a man outside the Workers Party club, Club Uí Chadháin, on Gardiner Place in Dublin’s north inner city in the winter of 1984. The 21-year-old victim was stabbed in the chest and was severely wounded, but survived.

What happened next is typical for a mafia story. At first, things went as they should go. Kelly was convicted of wounding and jailed for ten years. However, after an appeal and re-trial he was convicted of assault and his sentence reduced to three years. Some newspapers reported about witness intimidation by Kelly and his gang, but nothing was ever proven.

By the 1990s, Kelly invested the money he had made from armed robberies in the organizing of drug shipments. Narcotics was Kelly’s main claim to national fame. He was the first person in Ireland to be jailed for bringing a major shipment of cocaine into the country. In 1992, he was caught with almost a kilo of high-grade cocaine worth £500,000 and sentenced to 14 years in prison the following year.

When he came home from prison, the world had changed. In 1992 he was the first “cocaine cowboy”, now there were hundreds. Despite having been gone for so many years, Kelly went right back to a life of crime. He had connections to every major gangster in Ireland and was treated with the utmost respect by the up-and-coming crime bosses. He was a much sought after source of advice about criminal issues and was a central member of a crime council made up of a handful of other veteran crime bosses who between them effectively controlled organized crime in Ireland.

But they didn’t control everything. After the peace agreement with Great-Britain, a lot of hardened, well-armed men had a lot of spare time on their hands. And not a lot of money that came in via donations. Why would people donate money for “the cause” if there was peace? So the Real IRA found new ways to garner some income: They started extorting drug dealers.

Obviously, this little racket caused quite a stir among the gangsters in Dublin. Eamon Kelly remained cool despite the threats. He flat-out refused to pay the Real IRA any money. Other drug bosses followed the example set by their “Godfather”, creating a tense situation between the two camps.

Things came to a critical point when Real IRA leader Alan Ryan was killed on September 3. BBC Dublin correspondent Shane Harrison said “Gardaí believe that Kelly was mentoring a number of criminal gangs that may have been involved in the murder of [the Dublin Real IRA leader].”

Whether there was any truth to this thought was beside the point. The Real IRA had to avenge their leader and do it in such a way that it would send a clear message to both the high-ranked bosses and low-placed soldiers. By killing Eamon Kelly, The Godfather, the Real IRA could not have been any clearer.

On February 6, 2013, the Sunday World reported that "two men, one in his 30s and the other in his 40s, were arrested in the capital earlier today" in connection with the murder of Kelly. "They are being detained under Section 30 of the Offences Against the State Act, 1939, at two garda stations on the north side of the city."

Comment by Paddy78 on December 12, 2012 at 1:49am
a real irishman...he did his time he didnt rat...he didnt take shit and did make his own rules,,,,, you live by the sword but i respect the man, he didnt rat in 92, and not many other leaders are consiglieres theese days as well, great story guys love it

Added some news to the profile of Kelly today. Two more arrests connected with his murder.