“There are [a lot of] places of worship in Las Vegas, but there is only one true god: money.” From The Green Felt Jungle 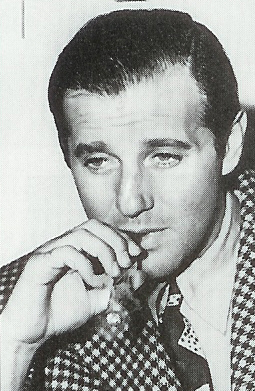 A century ago Mark Twain wrote the following about Nevada: “In Nevada the lawyer, the editor, the banker, the chief desperado, the chief gambler, and the saloonkeeper occupied the same level of society, and it was the heighest. [...] To be a saloonkeeper and kill a man was to be illustrious.”

In the summer of 1941 Benjamin “Bugsy” Siegel (right) sent Moe Sedway to Nevada to establish the Trans-America wire service there. T-A wire service was controlled by the Chicago Outfit. Gus Greenbaum had established T-A in Arizona, and Siegel with help from Jack Dragna and Mickey Cohen in California. It was Sedway’s task to establish it in Nevada. Sedway was considered a nobody. He pulled off the task though. Siegel went to Las Vegas himself in 1942 to tell the casinos that the wire service could be obtained by handing Siegel all or some (depending on the casino) of the income from the casinos bookmaking operations. Siegel received $25.000 a month from Las Vegas casinos bookmaking.

In 1945 Siegel set up shop in Las Vegas. He took Sedway for a drive to “the middle of nowhere, stopped the car, and pointed to a few old buildings. Siegel then told Sedway about his plan: “Moe, we’re going to buy this hunk of land. And we’re going to build the goddamnest biggest hotel and casino you ever saw. I can see it now. ‘Ben Siegel’s Flamingo’ that’s what I’m going to call it.

The Flamingo Hotel and Casino

Benjamin “Bugsy” Siegel wasn’t kidding about his Flamingo. The cost of the hotel and casino was originally estimated at $1.5 million. But Siegel wanted the very best of everything. Every bathroom had its own sewer line. He ordered the best imported woods and marble. These were the post war times, and there were a lot of shortages, Siegel’s contractor couldn’t produce all the necessary building materials. As a result Siegel spent large amounts of money and bought the materials from black marketeers. These black marketeers would deliver the materials in the morning, then they would come back at night to steal it again. Siegel was losing money all across the building site. The Flamingo ended up costing $6 million.

On December 26, 1946 the Flamingo was opened. It was a disaster. Siegel had chartered planes to take celebreties from Los Angeles to Vegas, the planes couldnt take off due to bad weather, and most of the celebs didn’t show. Still several did, among them Siegel’s good friend and actor George Raft (Raft would later turn up as a manager at a London casino, he was a front man for Meyer Lansky.) The casino had a bad opening night and Siegel was getting irritated. One of the guests approached him to congratulate him on the beautiful hotel and casino. The man called Siegel “Bugsy,” Siegel immediately turned to ice and got very angry. It was known to most that Siegel didnt want to be called Bugsy. He had pistol whipped people for it, even fired bullets past the head of a man that, as ordered, was crawling around an olympic sized swimming pool.

In its two weeks in business the Flamingo hotel and casino lost $100.000 Siegel decided to close it down, and finish construction. On March 27, 1947 it reopened its doors, and eventually began making a profit. It was too late for Siegel though. Siegel had spent too much of other peoples money, and insulted too many powerful figures. On June 20, 1947 he was murdered while in his Beverly Hills mansion. A gunman fired bullets through the living room window. Siegel was hit twice in the face and twice in the chest. Alan Smiley was in the living room when Siegel was shot and said: “His right eye flew right past my face.”

Twenty minutes after the shooting Moe Sedway, Morris Rosen, and Gus Greenbaum walked into the Flamingo casino and said they had taken over. The good times for the mob had begun.

Comment by Dave Critchley on August 24, 2011 at 7:50pm
The Trans-American was established in about 1945 and folded in June 1947.  It was alleged to be the answer to the Continental Press wire service.  However, the story that Continental was "Capone controlled" is a contentious one that I would disagree with.  After looking at the evidence for such a link in the Kefauver Hearings, I just don't see it there.