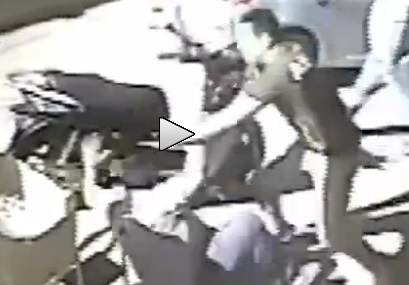 So much for working in the shadows. Italian authorities have released video images (below) of a vicious attack in broad daylight on a shopkeeper by Mafiosi of the Palermo Noce clan. The shopkeeper, Antonio Vizzi, had refused to pay 3,000 euros in “pizzo,” protection money, to the local Mafia family and was beaten as a result.

The man who ordered the attack was Giuseppe Castelluccio, leader of the Noce clan. He had even come to the store personally to demand the protection payment. When Vizzi continued to stand up against the Mafia, Castelluccio sent several of his men to Vizzi’s shop to make things “right.”

What happened next was caught on tape by the store’s surveillance cameras. Vizzi was beaten severely while other mobsters held bystanders at bay. Vizzi’s son-in-law came to his father’s aid, but was dealt with in similar ruthless fashion and ended up in a coma for two days.

The attack took place on November 2, 2013, but last month, justice was served as Castelluccio was found guilty of attempted murder and extortion and sentenced to 17 years in prison. His henchman, Massimiliano Di Majo, who physically handed out the beating, was sentenced to 16 years behind bars.