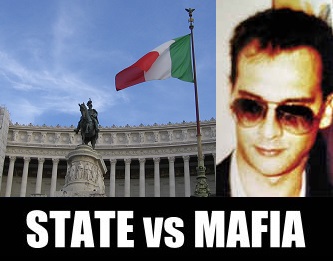 Sicilian Cosa Nostra is feeling the heat. And Italian authorities continue to turn up the pressure. So much so that the Mafia has threatened to wage a new war against the state and in particular those prosecuting them. And this time, young boss of bosses Matteo Messina Denaro could join in.

Last month, imprisoned mob boss Toto Riina’s threats were featured in media reports around the world. The Mafioso who was responsible for the vicious murders of scores of prosecutors, judges, politicians, policemen, and journalists was caught on a wire telling a fellow inmate that prosecutors were “driving [him] crazy” and that “they [had] to die.”

Luckily, the prosecutors in question, Antonio Ingroia and Nino Di Matteo, are still alive and continue their fight against the Mafia. But the tone had been set.

After boss of bosses Bernardo Provenzano ushered in a new strategy for the Sicilian Mafia, attacks on anti-mafia personnel ceased. The new strategy meant Cosa Nostra would lay low in order to rebuild in the shadows. But after his arrest in 2006, Cosa Nostra bosses could have pondered a change in strategy.

The man who is alleged to be currently leading Sicilian Cosa Nostra is 51-year-old Matteo Messina Denaro. His father led the Mafia of Castelvetrano in Trapani, Sicily, essentially causing Messina Denaro to be born into the Mafia. Despite being dubbed by reporters as a playboy, he was not to be taken lightly at all. His father had taught him all about ‘the life’ and especially how to take the lives of others. Messina Denaro was once quoted as saying, “I filled a cemetery all by myself.”

While it is not entirely clear whether Messina Denaro (right) is in effect the new boss of bosses of Sicily, it is clear that he runs the Mafia in Trapani. Authorities in Italy and North America also consider him to be one of Cosa Nostra’s major drug traffickers. Using his influence and narco-euros, he has managed to infiltrate the legitimate economy in Trapani province, building large parks filled with wind mills that generate green energy. He also owns various supermarket chains. His investments have made him a billionaire.

It has also earned him the support of the citizens of Trapani (photo below). Author Carl Russo visited the region while researching his book The Sicilian Mafia: A True Crime Travel Guide and was surprised at the powerbase Messina Denaro had created: “I was in Trapani, which is I believe the third largest city, around there the people are still close to the Mafia. Messina Denaro has quite a pull on the people of Trapani. He has gotten them jobs and is seen as a beneficent power, he’s been able to pass out jobs to a region that has very high unemployment. If you view media reports from the area you’ll find people from the streets of his hometown Castelvetrano praising him,” Russo tells Gangsters Inc.

And just like in politics, public support is everything. After the Mafia’s campaign of terror in the 1980s and 1990s, in which they murdered anyone who stood in their way, the Sicilian public took a firm stand against the violence and against Cosa Nostra. Without the support of the citizens, the Mafiosi had a more difficult time demanding their pizzo -protection money- and were shunned by businessmen who, before the war against the state, would have gladly participated in a deal.

Provenzano’s low-key strategy has enabled the Mafia to bring relative order and peace among its ranks. But authorities continue to hunt mob leaders, fugitives, and are very successful at making arrests and bringing down lucrative rackets. Some within the Mafia are becoming quite restless and rethinking their strategy.

Toto Riina has made his position clear. Though, as Gangsters Inc. reported last month, it isn’t clear where exactly Messina Denaro stands on this issue, it seems he prefers to refrain from violence against prosecutors. A major player in the war against the state during the 1990s, he has had a falling out with Riina, who said the following about the Trapani Mafioso, “this Mr. Messina Denaro, this fugitive who acts like he's the boss, doesn't give a shit about us. He dabbles in streetlights, but he'd look a whole lot better if he shone a light up his ass!”

Did Messina Denaro refuse to murder one of Riina’s reviled prosecutors? It would explain Riina’s comments.

Yet, it seems that Messina Denaro is leaning towards agreeing with Riina more and more. Though there has been no violence against Trapani prosecutors, there have been multiple threats and acts of intimidation.

Messina Denaro has been facing the prospect of spending life in prison since 1993 when he became a wanted man after being indicted for his involvement in helping plan bombings in Rome, Florence, and Milan that were part of the Mafia’s war against the state. In absentia his life sentence has been handed down and will await him upon his arrest. Despite, making billions and enjoying a large amount of support, Messina Denaro is feeling the heat. His main nemesis is Trapani prosecutor Marcello Viola (right) who, together with his team, has been closing in on the brutal playboy boss.

Police made several major arrests in the past few years. In 2009 they arrested Salvatore Miceli in Venezuela, who functioned as Messina Denaro’s middle-man between Cosa Nostra and South American drug cartels. That same year, police in Trapani picked up thirteen men who were accused of carrying out Messina Denaro’s orders and providing him with false passports and other documents.

Also in 2009, prosecutors broke up an international ring led by the Sicilian Mafia that tried to use fake Venezuelan bonds to obtain credit lines totaling $2.2 billion from HSBC Holdings Plc, Bank of America Corp. and unidentified British banks.

“This was a colossal operation,” Marcello Viola, one of the lead prosecutors on that case, told Bloomberg News at the time. Some of the Mafia-linked people involved “were experts in finance who traveled the world.”

In 2012, Viola expanded his search for Cosa Nostra’s ill-gotten riches as he requested the secretive Vatican Bank to disclose details of an account held by a priest in connection with a money laundering and fraud investigation. The priest, Father Treppiedi, 36, served in Alcamo, near Trapani. Viola believes Messina Denaro used him to launder large amounts of money.

That same month, Marcello Viola received a long letter at his office in Trapani. The sender seemed to be well informed and warned the prosecutor to quit his investigations. If he didn’t, things would not end well the letter hinted.

The threat was the latest in a long string of threatening or intimidating incidents that confronted Viola and his fellow anti-mafia prosecutors. In the summer they received a letter containing death threats and a 9mm bullet.

In September of last year, a security officer found a bug in the Palace of Justice where Viola works. However, the bug did not work, it could not transmit an audio signal. Police believed the bug was meant to demonstrate how easy it was for the Mafia to access Viola’s inner sanctum.

The bug had been placed next to the front door of the building. Not the main entry, but the one in the rear which is only used by attorneys and prosecutors. It’s located in a secure area of the building and to get there you have to cross an area closed to the public. It is even monitored by cameras. When investigators tried to check the recorded video for images of the person who planted the bug, however, they found that the tape had been tampered with. It ran in a loop, covering the time of the supposed planting with old recordings.

But the courageous prosecutors won’t budge. In turn, Cosa Nostra is becoming even bolder. Last week, Viola’s office was broken into and files may have been stolen, police said.

Prosecutor Viola’s main target is Messina Denaro. Viola’s office is located in Trapani, Messina Denaro’s territory and powerbase. Though there is no hard evidence of the Mafia boss’ involvement in any of these incidents it is unlikely he did not know of or approve these actions. His name will be mentioned in any article dealing with these threats so if they were committed without his approval it is certain he would make sure they ceased by stopping the person responsible for bringing unwanted attention to his operations.

It is much more likely that Messina Denaro is pushing the boundaries of Provenzano’s strategy of laying low and resolving conflicts without violence. Each threat becoming more intimidating until the threat of violence is no longer enough. Only the act of real violence will get Cosa Nostra bosses the results they crave. It won’t, of course, but they will think otherwise, ignoring all the lessons of the past.

One of Matteo Messina Denaro’s relatives arrested last December is his cousin Lorenzo Cimarosa, now cooperating with investigators. This neo-pentito reported that a son-in-law of imprisoned capomafia Totò Riina sought to meet with MMD for assistance in a plot to kill prosecutor Francesco Messineo—with TNT! MMD answered, through an old Mafia associate in Corleone, that he was incapable of meeting with Riina’s in-law at the time. Authorities took the polite response as a sign of respect and an indication that Riina may still run the show.

Why would a cousin of the powerful fugitive flip for the law? “We are tired,” Cimarosa said, “of being subjected to arrests, seizures and convictions because of Messina Denaro, who thinks only of himself and his fugitiveness.”