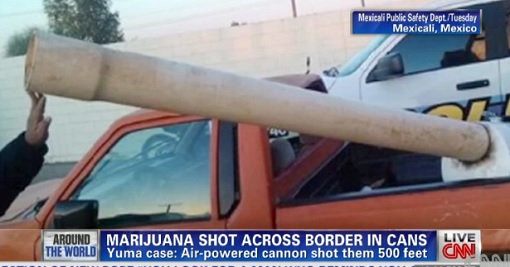 With the United States heading into forced spending cuts, Americans might think their grass isn’t as green as it used to be. Maybe, it’s greener on the other side of the fence? Mexicans beg to differ. While U.S. customers enjoy cocaine, heroin, meth, and weed from their Southern neighbors, the citizens of Mexico are living in a country that is going through somewhat of an identity crisis.

On the one hand, it’s doing great! Mexico’s economy is on the rise and the nation is emerging as a powerful player. On the other hand, the drug war is viciously tearing it apart.

On Tuesday, Mexico's Interior Ministry reported that 26,121 people have gone missing in Mexico over the past six years as violence surged and the government led by President Felipe Calderon cracked down on drug cartels. This number is not to be confused with the death toll created by the drug war, which by now has passed 60,000. 2,243 people died between December 1, 2012, and February, 2013, alone.

No matter how great the economy is doing, it isn’t worth much when your loved ones are either getting kidnapped or butchered. And the end is not in sight. Drugs remains Mexico’s main moneymaker and drug smugglers are continuously trying out new ways to get drugs into the lucrative American marketplace.

“Mexican smugglers have used tunnels, cars, boats and even the human body in attempts to sneak drugs past U.S. agents in an endless cat-and-mouse game on the U.S.-Mexico border”, CNN reported today. "Now smugglers have devised a new invention to ferry their contraband over the nearly militarized border: cannons.”

Yes. Drugs are now simply being shot over the impenetrable wall. “An air-powered cannon fires bags of illegal drugs into the air from Mexico and plops them on U.S. soil, for nighttime retrieval by conspirators,” U.S. authorities say. (Photo below shows smugglers using the cannon.)

An inventive and pretty funny way of smuggling dope. However, drugs are only funny for a very short time. Recreational users having fun on a night out risk turning into addicts that will give $5 blowjobs behind a shabby motel to fund their high. Cartel bosses become rich and spend billions on entertainment in the form of hookers, cars, and whatever fancies their taste at the time. But even for them the fun stops when police break down their door or a rival decides to send a hit team for a round of torture and death. Even the baddest drug dealer usually end up in prison or dead.

The most wanted man in the world of drugs hit all the front pages across the world this week as he was presumed to have been killed during a shootout with soldiers in Guatemala. Drug lord “El Chapo” Guzman is without a doubt the richest and most infamous of his peers. Yet, he continues to elude authorities. Yes, continues, because despite initial media reports, he has not been killed. Just a rumor mill gone wild.

Of course, still plenty of people died last week because of drug violence. A 13-year-old Mexican hitman was found dead along with five other people. A month ago he was arrested and confessed to authorities that he had taken part in ten murders. Due to his age he could not be criminally prosecuted and was released him to the custody of his family. His former buddies of the Los Zetas drug cartel paid him and his family a visit. They killed four women and one man and tortured the boy before they killed him.

In the war on drugs anyone can become a casualty. Drug dealers, hitmen, cops, judges, journalists, politicians, civilians, senior citizens, women, children. “If it bleeds why not kill it?”, seems to be the general thought of your average cartel gunman.