Sinaloa drug cartel leader Joaquin “El Chapo” Guzman has escaped from a maximum security prison and is on the run from authorities. Again.

The drug lord used a 1 mile-long tunnel as his escape route from Altiplano prison, which is located near Mexico City. The freshly constructed underground tunnel had ventilation and stairs. According to media reports, Guzman was last seen in the prison showers on Saturday. Eighteen guards are being questioned.

It’s the second time Guzman has escaped from prison. He is considered to be the most powerful drug lord in Mexico and was even named on Forbes magazine’s 2009 list featuring the world’s most powerful people. 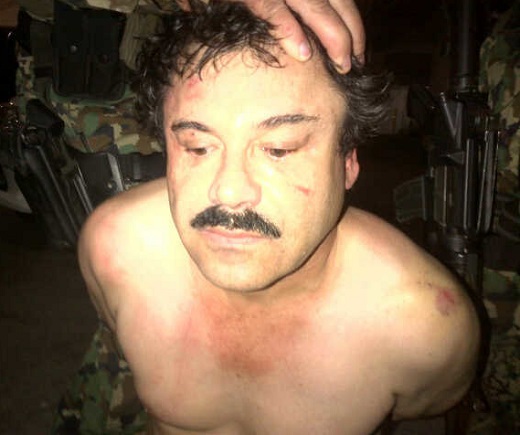 Until his arrest in 2014 (photo above), he had been on the run since 2001 after escaping from another Mexican prison. That arrest came as a shock to everyone. No one expected such a powerful crime boss to be captured.

For thirteen years Joaquin “El Chapo” Guzman was like a ghost. An all-powerful ghost though, who controlled large parts of Mexico and whose influence extended far into South and North America and Europe. The City of Chicago branded him the first “Public Enemy No. 1″ since Al Capone, due to Guzman’s grip on the city’s drug market and its gangs. U.S. authorities offered a $5 million reward for information that led to his capture.

Five million may seem like a lot of money to us regular folk, but for El Chapo it was pocket change. It hadn’t always been like that though. As the son of a peasant farmer he never had much and had to work real hard to accomplish even that. Unlike most farmers, the Guzman family didn’t tend to cattle or corn, they grew poppy instead. Guzman’s father was connected to one of the key players of the Sinaloa Cartel of that time. It wasn’t long before his son, El Chapo, which means Shorty, immersed himself in the violent world of smuggling and drugs.

By the late 1970s, Guzman was put in charge of drug transports from Mexico to the U.S. He took the responsibility extremely seriously. When one of his shipments did not make it across, for whatever reason, the middle-man had a big problem.

As Malcolm Beith writes in his book on Guzman titled The Last Narco, “If a delivery wasn’t made from the Sierra, or was delayed for some reason (even heavy rains, which would wash away entire roads, were no excuse), [Guzman] would execute the employee himself. He didn’t lose his temper, he just shot the man in the head.”

His modus operandi impressed Cartel higher ups and it wasn’t long before El Chapo rose through the ranks. His calculated ruthlessness proved to be too much for his rivals and he soon became the main leader of the Sinaloa Cartel.

As boss he made billions. His territory kept increasing and now encompasses most of Mexico. The Sinaloa Cartel provides drugs for at least 78 U.S. cities and recruits American street gangs to do its bidding there. His wealth and power saw him listed in several Forbes lists, including the Most Powerful People on Earth list where he was listed with individuals like Barack Obama and Bill Gates.

But despite all his power and wealth, El Chapo still felt the heat of the law on his back constantly. In 1993 he was sent to prison on murder and drug charges. It was a deal Guzman was fine with. He practically owned the prison. 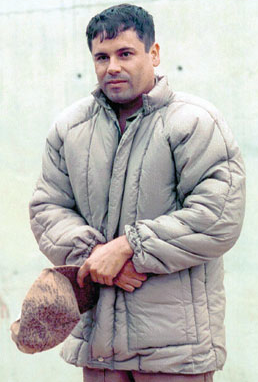 Hell, he owned half of Mexico! Doing time there was no problem. Doing time in the United States, however, was something else entirely. 23 hour lockdown. Shackled in a tiny cell. No power to get things done. Now that would be hell on earth.

So when Mexican authorities signed a deal with the U.S. where they agreed to hand over drug traffickers to American authorities, Guzman immediately began thinking about getting out of there.

He did. In 2001 he quietly escaped the prison by going out with the dirty laundry. For the next thirteen years he would become a ghost. Haunting Mexico and its citizens. Haunting his rivals. And exerting control over a criminal empire not seen since Pablo Escobar.

And now, he has done it again!

Last seen on Saturday, officials say that Guzman's escape was discovered when officers checked his cell in the prison. According to the BBC, “They found a hole around 10 meters (32 feet) deep with a ladder, which led to the tunnel. It came to an end at a construction site outside the prison walls, security commissioner Monte Alejandro Rubido said at a news conference.”

Guzman’s status as a gangland legend was already set. It’s been carved in gold, stone, and blood. But somewhere in Mexico a new narco-corrido about El Chapo is being written. One that will keep his myth going. The legend is alive and back among his people. And his enemies better watch out.