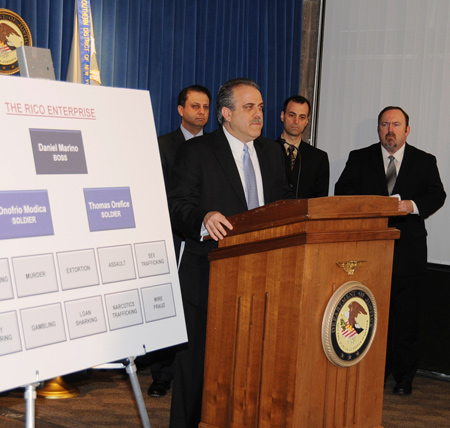 The general public sees Italian-American mobsters as honorable gangsters. Thugs with a heart and a decent moral code by which they operate their criminal businesses. But on April 20 that view drastically changed. That day, fourteen Gambino Crime Family members were indicted and charged with running a sex trafficking ring which pimped out women as young as 15.

Besides the prostitution ring charges, the mobsters were also charged with a variety of regular mafia crimes such as: racketeering, loansharking, illegal gambling, narcotics trafficking, assault, and four murders.

The most notorious name on the list of defendants is Daniel Marino (69). Prosecutors say he “is a longtime member and currently a Boss of the Gambino Family.” And add that “in that capacity, Marino has over 200 fully-inducted or "made" mafia members under his command, as well as hundreds of associates who commit crimes with and for the mafia.” 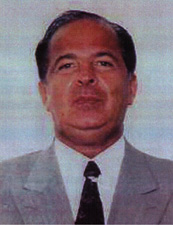 As a leader of the family, Marino (right) would have had to approve or at the very least condone that his underlings ran a prostitution ring. To many people prostitution is an extremely dirty business. It is frowned upon. Most mobsters themselves find it below their stature.

Former RCMP intelligence analyst Pierre de Champlain wrote a book titled Mobsters, Gangsters, and Men of Honour in which he explains the structure and code of the Mafia. According to him there is no doubt the mob itself despises pimps. “In the social ladder of criminals, and especially within the underworld there are types of criminals that are regarded as the lowest form of criminal. Thieves and, mostly, the pimps are among them. One of the reasons why the Mafia has always regarded bikers as "inferior" is precisely because they do get involved in prostitution as pimps.”

So how could a Gambino soldier not only operate such a business, but ‘employ’ underage girls as well? And why do we treat these criminals as if they have good moral standards?
Creating the myth

The American mob has intrigued millions of people around the world for decades. Ever since Al Capone was courting the press and cracking jokes with reporters, regular citizens have had a big interest in these thugs in suits. This only intensified after the release of Francis Ford Coppola’s Academy Award winning masterpiece The Godfather.

The Godfather showed everyone what the American mob was like. How they behaved and why they did what they did. The movie showed us gangsters with class. Vicious murderers and thugs who sat down with politicians and made them look like the real criminals. Don Corleone and his family broke the law, of course, but they did it with respect and honor. At least that is what it seemed like after watching The Godfather.

Ever since then, a myth surrounded the American Mafia. A myth of respectability. This myth was backed up by numerous Mafiosi and authors who traced the origins of the Mafia to Sicilian freedom fighters who stood up for the poor. Even in the United States the mobsters claimed they functioned as a shadow government. A government that was involved in illegal activities, but only because its members were being discriminated and it had to protect their fellow Italians from the real government.
Dr. Jekyll & Mr. Hyde and how Lucky Luciano was labeled a pimp

Over the course of several decades that myth has slowly but surely evaporated. The FBI and prosecutors have done an amazing job at breaking down the mob’s criminal rackets and exposing them for the greedy and lowly criminals they really are. When The Godfather movie portrayed Don Corleone as being opposed to drug trafficking it gave the impression that the Mafia as a whole operated by these standards. Real mobsters reinforced that belief as much as they could. But when the indictments and subsequent trials came, it was clear to everyone that the American mob was heavily involved in the drug trade.

The key word is money. There is a lot of money to be made from drugs. And there is, and has been for a long time, a lot of money to be made in the sleazy world of hookers and brothels. Something many successful and powerful gangsters knew. Men like infamous mob boss Charles “Lucky” Luciano. Credited by many to have been a major force in shaping the modern Mafia, he, too, was involved in the sordid business of prostitution.

Of course, Lucky Luciano was not directly involved. Just like prosecutors claim Daniel Marino was not directly involved. But through lower ranked associates Luciano made money from the prostitution racket. Though the connection between him and those associates was slim, it was enough to make him stand trial on a compulsory prostitution charge. The trial took place in New York City in 1936 and during that time Luciano was not yet the household name he would become in later decades. “Lucky kept pretty low-key before the vice trial and I don't think was ever much noticed by the public before 1936,” says crime historian Rick Mattix.

Ellen Poulsen, author of The Case Against Lucky Luciano: New York’s Most Sensational Vice Trial, adds: “Before those charges were brought, Luciano was known only to members of the general public who closely read the tabloid newspapers. He was better known to police and those in his racetrack circles, and to his underworld associates.”

All of that would change when a jury found him guilty. Poulsen: “The charges, trial, and conviction tainted Luciano's international reputation and left him with an indelible scarlet letter. His criminal interests were varied. Yet the trial left him branded as a glorified pimp, and the subsequent deportation made his historical relevance difficult to define from an American perspective. That lack of real understanding of his life has left him open to the inappropriate label of "vice lord," which is unfortunately his legacy.”

With hip hop dominating the American music charts, popular culture has started to change its attitude towards the word pimping. Rappers like Snoop Dogg and 50 Cent have given new meaning to the word pimp by adding glamour to a vicious and sordid business. MTV aired the television show Pimp my ride in which youngsters can have their old beat up car turned into a fast automobile with widescreen television and bubble bath in the back seat. Perhaps it is time to bring back some reality to the word ‘pimp’. 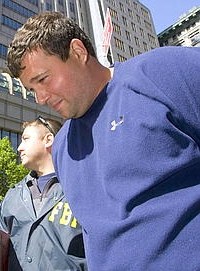 Prosecutors claim that Gambino soldier Thomas Orefice (33, photo right) supervised a crew that included Dominick DiFiore, Anthony Manzella, Michael Scotto, David Eisler, Steve Maiurro, and Suzanne Porcelli. From 2008 to 2009, the crew allegedly operated a prostitution business where young women and girls, including an underage girl who was 15 years old at the time, were exploited and sold for sex. Porcelli functioned as madam and ‘hooker booker’.

According to the indictment: “The defendants first recruited various young women and girls -- ages 15 through 19 -- to work as prostitutes. The defendants then advertised the prostitution business on Craigslist and other websites. The defendants drove the women to appointments in Manhattan, Brooklyn, New Jersey, and Staten Island to have sex with clients. [They] then took approximately 50 percent of the money paid to the young women. [And] also made the women available for sex to gamblers at a weekly, high-stakes poker games that Orefice and his crew ran.”

Pierre de Champlain says the indictment is proof of the loss of a moral code: “It once again shows that today's ‘men of honor’ have lost their sense of their Mafia moral values that they once inherited from their great-grand-fathers. Because today, we are talking about the forth, if not the fifth generation of Italian mafiosi who came into America in the 1910s. There is no doubt that the code of conduct, the code of honor, has eroded a lot.”

“All because of the mighty dollar,” De Champlain continues. “Today, guys don’t have to wait too long to become a made member. Once he gets his button, he is appointed Capo the following week. He has no intelligence or experience, he only knows one thing: making a buck at any price.”

Those comments fit Thomas Orefice perfectly. Gambino Boss Daniel Marino and Orefice first met while both in the same prison. Over a period of 18 months the two men began to bond and Marino decided to take the young wannabe wiseguy under his wing. In 2008, four years after being released from prison, Orefice became a made member of the Gambino Family. Marino and Orefice now face life in prison if they are convicted of racketeering charges.