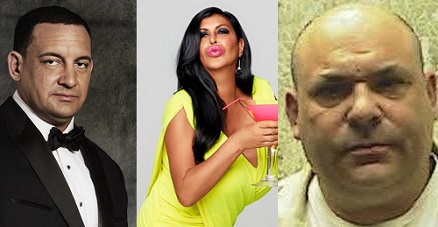 Another ghost cast member of the Mob Wives television series goes down. Mob associate Luigi Grasso (photo above, right), also known as Ronnie Petrino, was sentenced yesterday to 20-years-to-life for transporting a cache of weapons and other potential robbery tools in 2012, the New York Daily News reported. He’s already behind bars on another case, serving 38 years, and this new sentence will run concurrently with that one.

Grasso is a cousin of recently departed Mob Wives star Angela Raiola, known to millions of television viewers as Big Ang. His legal troubles regularly made the show as Big Ang and her fellow Mob Wives cried, yelled, and commented on the ongoing case in which Junior “Hector” Pagan (photo above, left), the ex-husband of her Renee Graziano, showed up as the prosecution’s star witness against Grasso.

Pagan admitted being the man responsible for the murder of James Donovan in a $90,000 dollar robbery, but was able to reduce his sentence by testifying against Grasso, who was found guilty in 2014 of his part in the robbery. Grasso was alleged to have gotten rid of the weapons after the deadly stickup.

“My cousin did do something wrong — trying to do a robbery — but he might be facing more time than Junior, the rat that killed the guy,” Raiola lamented in front of Brooklyn Federal Court on an episode of the Mob Wives.

Big Ang passed away on February 18, 2016, after a battle with lung and brain cancer.

Grasso, meanwhile, continues racking up time in his cell for illegally dealing in weapons.