Montreal mobster caught in Arizona with 62 kilos of cocaine 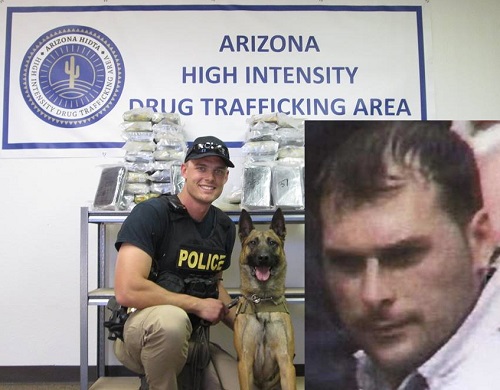 You know times are bad when the brother of a Mafia boss is driving a car loaded with 62 kilograms of cocaine across the border between the United States and Canada. Yet that is exactly what Girolamo Del Balso (photo above, right) was trying to do. His older brother Francesco is one of the leading members of the Montreal Mafia in Canada.

According to Arizona police, Girolamo was stopped on February 17, “for a moving violation.” The trooper felt something wasn’t right and requested the assistance of the Kingman Police Department K9 to sniff out potential narcotics. Kingman Police Officer Simonsen and his trusted partner K9 Amigo (photo above, left) responded to the scene where Amigo indeed sniffed out an illegal substance in the vehicle.

A subsequent search yielded approximately 62 kilograms of cocaine destined for Canada. The cocaine has a street value of $3.7 million Canadian dollars and $1.5 million United States dollars.

Del Balso was booked into the Mohave County Jail on numerous felony charges to include Possession of Narcotics for Sale and Transportation of Narcotic Drugs for Sale. He remains behind bars in Arizona.

His arrest is a clear sign that the Montreal Mafia is experiencing some problems since police in Canada have cracked down on their operations in recent years. Girolamo’s brother Francesco himself is currently in prison in Canada after he was arrested in 2006.

That arrest was a result of Project Colisée, a big investigation into the Montreal Mafia, which continued on for several more years and eventually also snared Girolamo. “He later admitted to being part of an illegal gaming house the Mafia had set up in an office building in St-Léonard and was sentenced to pay a $10,000 fine in 2012. In December, he pleaded guilty at the Montreal courthouse to threatening someone and was sentenced to pay a $750 fine,” the Montreal Gazette reported.

Project Colisée and other investigations combined with an internecine mob war have severely crippled the once mighty Montreal Mafia, led during those times by the Rizzutos - father, son, and grandsons.

Rebuilding that criminal empire takes a lot of muscle and money, both of which you can obtain with cocaine. Of course, you’ll have to get the coke to Montreal first.