Six members of MS-13, the transnational organization also known as La Mara Salvatrucha, were indicted on Wednesday in federal court in Boston and charged with racketeering. Five of them allegedly participated in the murder of a teenage boy in Lynn, Massachusetts, on July 30, 2018.

A seventh defendant, an unnamed juvenile, was separately charged in a sealed information. All defendants are alleged members of the Sykos Locos Salvatrucha clique. Those named in the indictment are:

Law enforcement officers responded to Henry Avenue Playground in Lynn on August 2, 2018, where a civilian had encountered the dead body of a young boy lying in a wooded area. Based on the condition of the body, it appeared that the victim had been murdered a few days prior to when the body was discovered.

It is alleged that Lopez, Salvador, Vaquerano, Tercero, and Reyes brutally murdered the victim. The evidence includes a recording of Salvador allegedly describing the murder in graphic detail, including how he, Vaquerano, Tercero, and Yanes stabbed the victim numerous times while Lopez assisted. The recording also described Duggins as being a leader of the clique. The victim was allegedly targeted because the gang believed the victim had been cooperating with law enforcement. 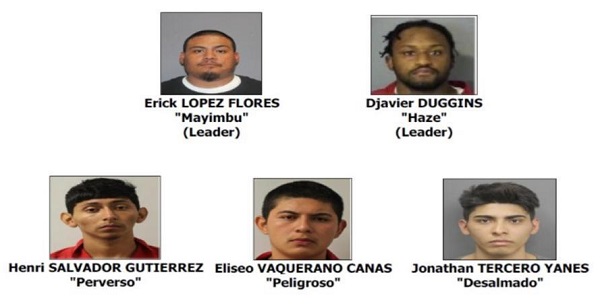 “MS-13 is a ruthless, transnational gang operating in our backyard,” United States Attorney Andrew E. Lelling told reporters. “This group routinely commits senseless acts of violence, including murder, to maintain control and instill fear. Dismantling MS-13 in Massachusetts and elsewhere is a top priority of the Department of Justice. Federal, state, and local law enforcement agencies will continue working together to investigate and hold MS-13 members responsible for these heinous crimes.”

“The murder of 17-year old Herson Rivas is another sobering example of the savagery of MS-13, the ruthlessness of its members, and the utter disregard they have for law and order, our communities, and the opportunities afforded to them while here in the United States,” added Harold H. Shaw, Special Agent in Charge of the FBI Boston Division. “This barbaric behavior cannot and will not be tolerated, and law enforcement at all levels will continue to use all available resources, aggressively exploit all available intelligence, and work as one integrated team with the sole intention of preventing additional murders or future acts of violence. I commend the FBI's North Gang Task Force for their unwavering pursuit of MS-13, the tremendous work conducted by our federal, state and local law enforcement partners regarding this threat, and the proactive efforts undertaken to move and share intelligence, all in an effort to stem the flow of violence. There is no place in society for MS-13---their violence and tactics need to be stopped---and this gang must be dismantled at all levels.”

The RICO conspiracy charge typically provides for a maximum sentence of 20 years in prison, three years of supervised release, and a fine of $250,000. However, Lopez, Salvador, Vaquerano, Tercero, and Reyes face up to life in prison because their racketeering activity involved murder.